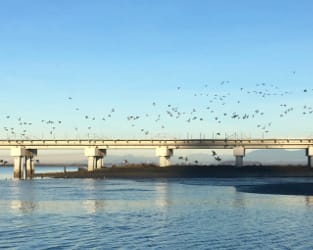 On a spectacular sunny, calm day in mid-November, I had the opportunity to participate in a volunteer effort to document the Fraser Estuary Important Bird and Biodiversity Area (IBA). Starting at first light, 40 experienced birders set out to count birds across the 754 square kilometres of the Fraser Estuary IBA.
It is a large site known to be of international importance to at least 15 bird species, so we were expecting to count a large number of birds. The total number of individuals counted was 282,402 birds representing 121 different bird species. The focus was on raptors and the species that trigger the IBA designation. The largest number of a single species counted during the day was 63,844 Dunlins. While not the highest number ever counted (126,285), it was a spectacular sight. Close behind were 52,388 American Wigeons – only 6000 short of the documented record for the Fraser Estuary IBA, but far more than the 23,000 individuals needed to be considered a globally significant congregation of birds. In fact, on just this single day, globally significant congregations of Iceland Gulls (Thayer’s), Dunlins, and American Wigeons were present in the Fraser Delta.
The count also documented 13 different birds of prey using the Fraser Delta. On this day, the most abundant raptor species counted was the Bald Eagle, with 183 counted. Remarkably, this is actually a fairly low number for the Fraser Estuary IBA, with most of the eagles still busy feeding on salmon further up the river. For those that spend any time out in the marsh habitats of the delta, the Northern Harrier is a constant joy to watch. There were 90 of these lovely raptors counted. Those counting were fortunate to spot a number of owl species including a couple of Great Horned Owls, a single Barn Owl and seven Short-eared Owls. I only got to see one of the shorted-eared hunting over the marsh along Brunswick Point, but still I count myself lucky. 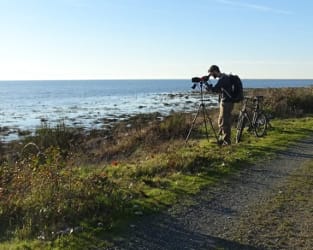 For a region that is under significant stress, it is reassuring that a well-structured survey is still able to return such impressive results. We’re fortunate that Canada’s IBA Program is in place, with volunteer IBA Caretakers championing the conservation of these remarkable areas. It is worth reflecting on how a group of passionate volunteers and NGOs have implemented the IBA Program, with its established thresholds for triggering an internationally recognized designation for an area. The condition of designate sites is then tracked through the volunteer monitoring of Citizen Scientists conducting counts. All of this data can be collected on the eBird phone app, which feeds automatically into the designation system through a publically accessible database managed in Canada by Bird Studies Canada. The IBA program is an impressive example of local communities putting in the time and effort to contribute what they can to conserve important bird habitat across Canada.
When the congregation of birds at a site reaches the levels required to trigger an IBA designation through this well-structured and independent system, you know that we are talking about a very special place. Yet even with all of this in place, our governments – federal, provincial, and municipal – are not taking sufficient action to protect bird habitat in the areas being identified. In other parts of the world, the IBA system is used to trigger protection of the habitats identified. It is past time that governments in Canada step up and establish legislation that prohibits the destruction of important bird habitat in remarkable places such as the Fraser Estuary.