How a Mobile Game Can Help Birds and their Habitats

By Adam Dhalla, gamer and birder 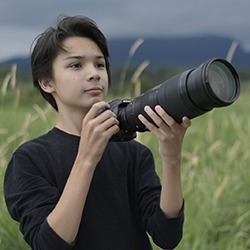 I became aware of conservation issues from the ripe old age of six. I was enamoured with a young Bottlenose dolphin named Winter who got caught in a box crab trap. She was saved, but lost her tail as a result of the incident and was fitted with a prosthetic one. Several books were written about her and then two Hollywood movies were made. I took a trip to Florida with my parents to photograph her at Clearwater Marine Aquarium, where she was rehabilitated.

Years later, when several Snowy Owls came down from the Arctic to Boundary Bay, BC, I was there to photograph them. Seeing these stunning birds made me think about climate change and its impacts on their species. After that spark, I really got into photographing, illustrating, and writing about birds, culminating in winning the American Birding Association’s Young Birder of the Year Award in 2018.

The ecological and cultural importance of birds and their habitats cannot be understated. Today, it’s easy to see that humans, through our reckless consumption of natural resources around the globe, are tipping the balance of nature. We are changing the world into an environment hostile to us and all other living things. I’ve decided to do something about it – and you can help.

As a gamer, I thought, why not use this kid-friendly tech? I came up with the idea of a fun educational tool to reach young people, get them outdoors, connect them with nature, inspire them to help, and to teach others. The concept? A 2D mobile game called Find the Birds: U.S. + Canada.

A lot of my friends, like most children and teens, are on their phones all day, playing a lot of games, using apps, checking social media, and more. So I thought, instead of fighting this trend, why not use it as a bridge to nature, transforming “screen time” into “green time”? Educate kids with accurate yet entertaining information using the most popular and portable device out there, so they learn without even realizing it? Although there are fun games with cartoony bird characters out there, nothing realistic like my game currently exists in the market, which should enable it to find a niche. Plus, many parents may support it as it’s non-violent and will be free to download. They might even find it enjoyable to play themselves while commuting on public transit!

I recently made helpful connections with the National Wildlife Federation and with Petricore, Inc., an indie game company that’s taking on the game design and coding, and my idea is starting to become a reality. I’m currently drawing concept art (see included samples). If you’re interested in being part of this project, there is a crowdfunding campaign you can support to help cover the production costs.

The game will be a blend of realism and entertainment. Much of what’s learned could be applied to the real world. It will feature simulations of actual locations all over Canada and the United States. For each of these bird “hotspots,” information highlighting their particular ecosystems, species, and conservation challenges will be included.

Players will tap to navigate left to right within each hotspot (see concept image). Using different tools, such as binoculars, scopes and cameras, they’ll search for native bird species. Once found, these will be collected in the field guide (see concept image), along with information such as diet, size, habitat, and song.

Another important part of the game will be conservation quests done to improve the “habitat health” of each area. These could as simple as recycling litter, or complex, like banding birds to collect data. They will be inspired by real issues and techniques and will empower the players, via links and notifications, to volunteer with non-profits doing this work, such as Birds Canada!

The beautiful, barren terrain and acute climate change issues of the Arctic really interest me, and I hope to have Sirmilik National Park, Nunavut (see concept image) in my game. The Black-legged Kittiwake (see concept image) depends on this habitat for breeding, which is the kind of realism that will be included.

Find the Birds: U.S. + Canada will inspire future generations to get involved with birds and conservation and serve as a steppingstone for a lifetime of exploration and wonder. With a new force of responsible young leaders, the world will be a better-informed and sustainable place.

To learn more and donate to the project, please visit findthebirds.com.

Thanks to Adam Dhalla for contributing to the Birds Canada blog! Adam lives in Coquitlam, BC, where he is an avid nature photographer, gamer, and birdwatcher, and high school student.