Data collected by volunteers with Birds Canada monitoring programs are used strategically to conserve birds, other wildlife, and their habitats throughout Canada and beyond. The marsh monitoring data that assist our partners in conserving Great Lakes wetlands represent an excellent example. In our recently-published program newsletter (The Marsh Monitor) and 25th-anniversary program report, you can see many ways in which results of the efforts of volunteers with the Great Lakes Marsh Monitoring Program, specifically, have been put into action.

Adding to those examples, I recently collaborated on three research projects that used marsh monitoring data to explore the conservation questions below. Read on to see what we found out! 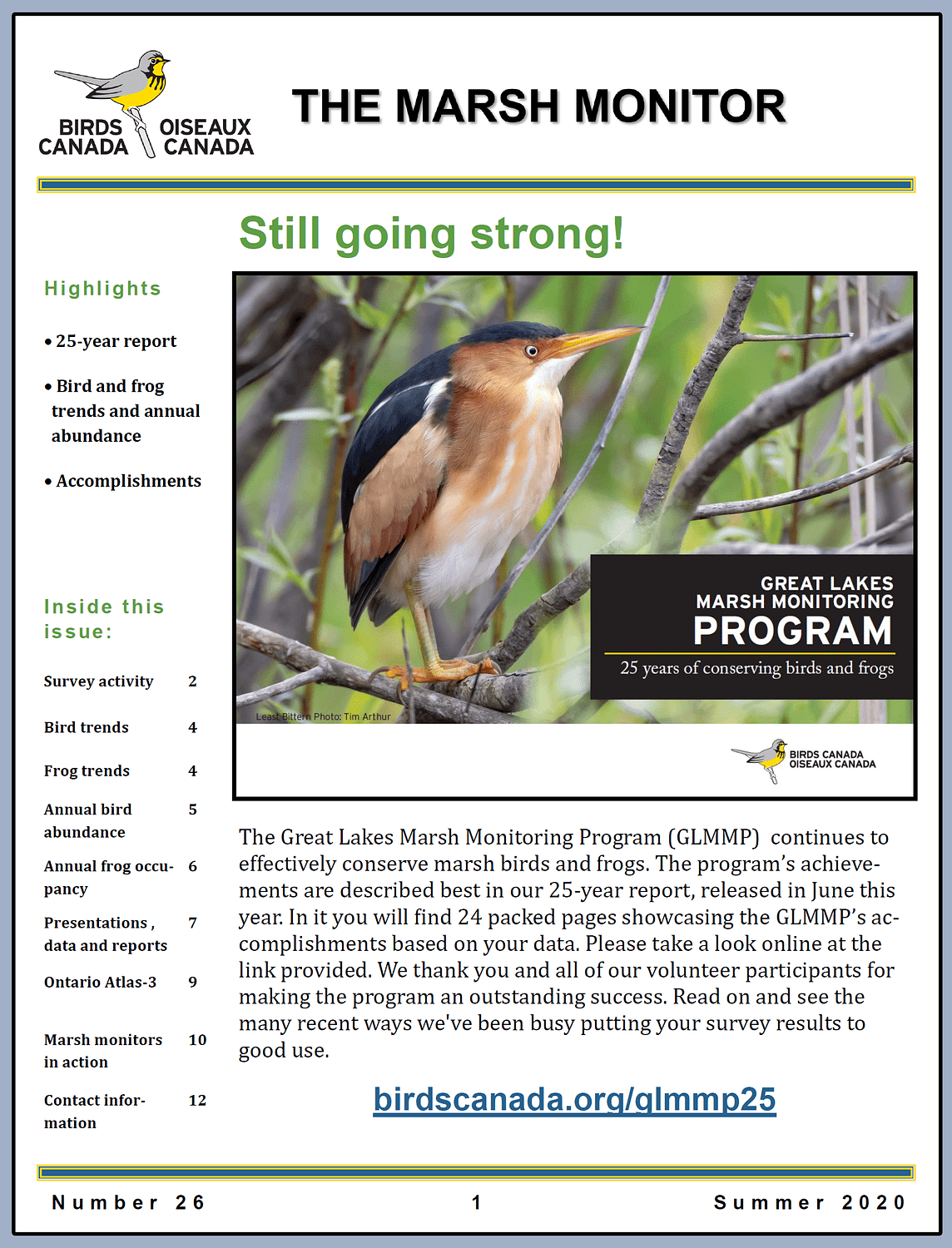 How are marsh birds and frogs faring in Toronto?

I worked with scientists from the Toronto and Region Conservation Authority to evaluate how well wildlife populations are faring across the City of Toronto, based, in part, on data from our Great Lakes Marsh Monitoring Program. The 2000-km2 area, which spans 42 km of Lake Ontario shoreline and adjacent areas inland, was designated as the Toronto and Region Area of Concern (AOC) under the Great Lakes Water Quality Agreement in the mid-1980s due to high pollution and contaminant runoff and high rates of natural vegetation loss due to urban sprawl. Since then, remedial work has created, protected, and restored natural features such as wetlands throughout the city. The results of our study show that populations of marsh-breeding birds and frogs in the Toronto and Region AOC are within the normal range of variability expected from a healthier nearby reference watershed – a result that may justify delisting the impaired status of wildlife within the AOC under the agreement. Despite this positive outcome, we found the city’s bird and frog populations were often at lower levels than within the reference watershed. Thus, we highly recommend continued restoration of wildlife habitat and protection of existing habitat within the city.

What are the most important wetlands to conserve for marsh birds in the Great Lakes region?

Birds Canada staff also worked with scientists from Ducks Unlimited Canada to prioritize wetlands for marsh bird conservation throughout southern Ontario based on data from our Great Lakes Marsh Monitoring Program. And, for the third project, I worked with scientists from Audubon to prioritize U.S. Great Lakes coastal wetlands based on data from the Great Lakes Coastal Wetland Monitoring Program: a long-term program – of which Birds Canada is a major partner – that tracks fish, birds, frogs, wetland vegetation, aquatic macroinvertebrates, and water quality over time in the U.S. and Canada. The results of these two studies identify the most important wetlands for conservation of marsh bird species. The high-priority marshes in Ontario occur in the relatively wetland-rich region along the southern edge of the Canadian Shield and in various other well-known regions and locations with relatively large amounts of marsh, such as the large intact Great Lakes coastal marshes along the north shore of Lake Erie. The high-priority wetlands in the U.S. occur along the shores of eastern Lake Ontario, western Lake Erie/St. Clair, Saginaw Bay, Green Bay, northern lakes Michigan and Huron, and western Lake Superior. Our findings represent an opportunity to improve wetland conservation throughout the Great Lakes where wetland loss and degradation continue to threaten marsh bird populations and the integrity of one of the world’s largest freshwater ecosystems.

Further details of our three projects can be found in the Journal of Great Lakes Research, The Journal of Wildlife Management, and Biological Conservation.  We at Birds Canada thank the many Citizen Scientists who collected much of the data used in these studies. We also extend our gratitude to the organizations that provided financial support for our research and monitoring, including in particular: Long Point Waterfowl and Wetlands Research Program of Birds Canada, Ducks Unlimited Canada, Eastern Habitat Joint Venture, Environment and Climate Change Canada, Government of Ontario, John and Pat McCutcheon Charitable Foundation, SC Johnson, TD Friends of the Environment Foundation, The Bluff’s Hunting Club, U.S. Environmental Protection Agency, and Wildlife Habitat Canada. 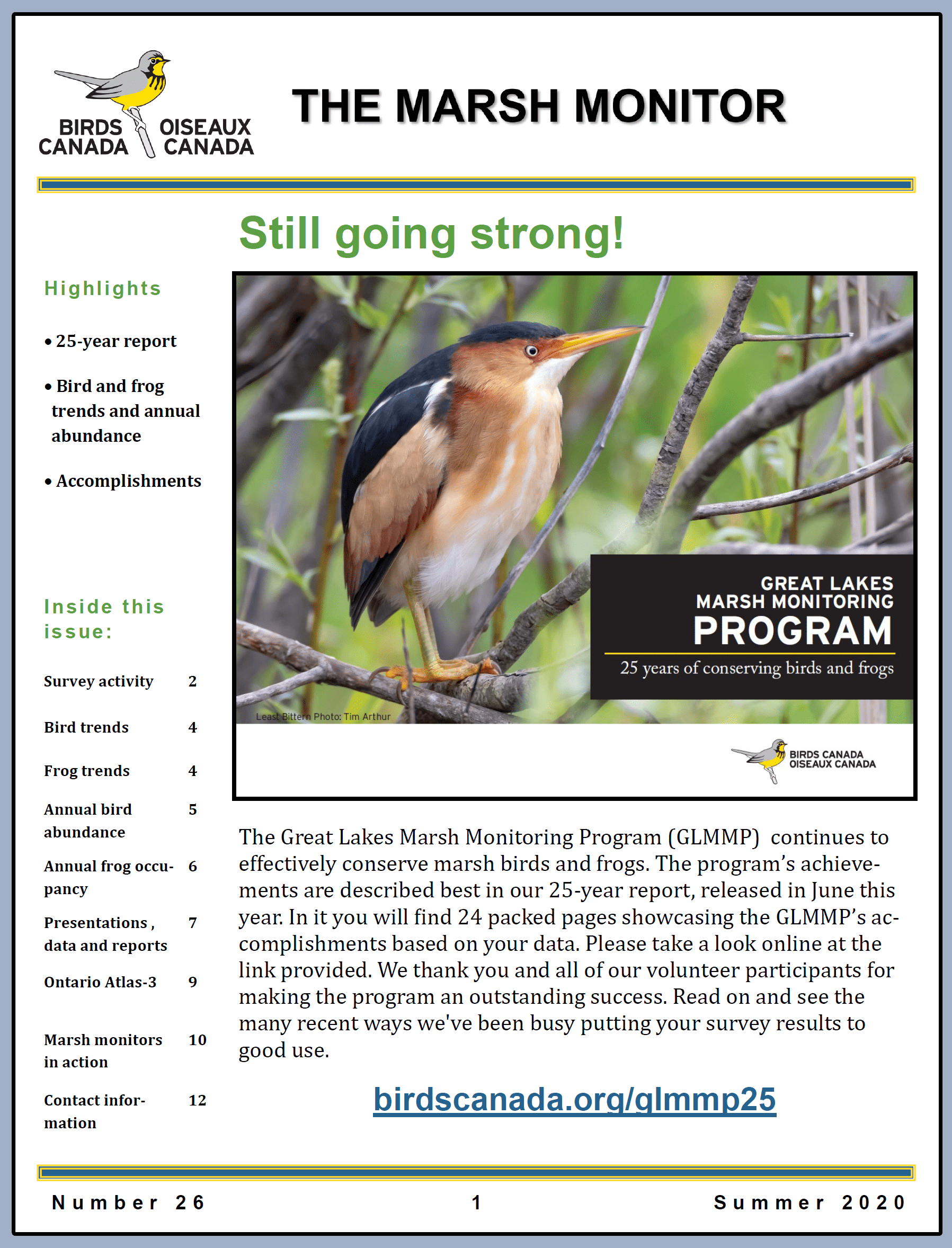