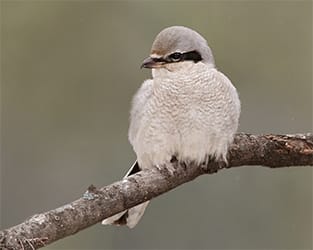 On the Family Day Monday, I headed out with two of my children to look for birds as we began the five mile hike to one of our local Scout camps, just outside of Peterborough. Spending time together in the great outdoors is something we have always enjoyed. As we turned off the highway, the rain began. Fortunately, it didn’t last and our spirits weren’t dampened. It wasn’t long before we began to hear chickadees and crows. As we walked, we spotted a bird flying away from us and got the binoculars out. It perched in a dead tree almost out of view, but sat still long enough for us to get a look.
It was a lifer: a Northern Shrike! To be sure, I checked the Audubon Bird App. We caught the bird’s attention, and it came right back toward us where we were able to get a closer look. Eventually, it decided we were nothing to worry about, and flew off. We continued on our way noting a dozen or so birds, from a single Red-breasted Nuthatch, to a flock of Mourning Doves, Blue Jays, cardinals, and 14 Wild Turkeys in a field. Each new species of the day was met with excitement, even if we had seen one dozens of times before.
The Great Backyard Bird Count may be important for science and research, but it’s also important family time. Looking for and watching birds is just one way I share my love of the outdoors and creation with my family. Any reason to go outside is good with me. Thanks to the GBBC, my family was motivated to get out three times over the weekend, and spend time together appreciating the wonders of nature.
Thank you to Deryck for sending us this wonderful story! We loved hearing that this family takes advantage of the Great Backyard Bird Count to reconnect with nature and each other, and to experience birds, new and familiar.

Have you Heard? It’s the #YearOfTheBird!

By Travis Muir from Victoria, BC. This story was awarded an honourable mention in our 2018 Great Backyard Bird Count Story Contest. 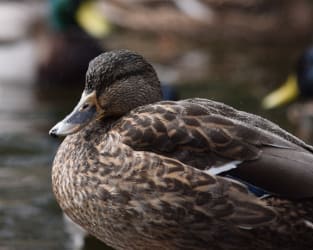 When I heard about the Great Backyard Bird Count (GBBC), I knew this would be a perfect opportunity for the Victoria office of the Nature Conservancy of Canada (NCC) to take part in the #YearOfTheBird. As the resident office bird nerd, I took it as my duty to mobilize my coworkers. I proposed we spend a health and wellness lunch break doing a count and submitting our data – talk about getting two birds with one stone! Once my office was on board, it was time to encourage the rest of the organization to get involved. What began as an innocent invitation quickly turned into a full-on competition, complete with meme wars and friendly online banter.
Once the day arrived, the eastern offices took to the field first and continued the chirping over Twitter. Tweets flew back and forth across the country until it was our turn to strap on our binoculars and cameras, and fire up eBird.
We set out to Victoria’s Beacon Hill Park. There, we observed a fantastic variety of species, including iconic Bald Eagles and Great Blue Herons; rafts of waterfowl, such as Mallards and wigeons; more elusive species, like the Varied Thrush, Brown Creeper, and Red-breasted Sapsucker; and even eight free-roaming Indian Peafowl that were originally purchased for the park’s zoo!
Across the country, 60 staff members in our organization got involved. Collectively, over the four-day-long GBBC, we documented 4600 birds and 79 species.
So which region soared above the rest? Well, it was actually a split. Ontario monitored a ‘whooping’ 1978 birds, representing 49 different species! Most of those feathered friends were Ontario-based, but birding fever knows no boundaries, and Ontario staff also observed Québécois, American, and even Swiss, birds.
However, when it came to diversity, BC blew away the competition with 64 different species recorded! While living on the coast accommodates variety, it may have helped that the rest of the country was under snow. Furthermore, I am never one to leave my binoculars at home when travelling – and with a vacation that conveniently had me in Mexico’s Mayan Riviera during the GBBC, I was happy to add 14 unique species to our region’s count.
The GBBC is a worldwide initiative. As such, the global Citizen Science community truly delivered this year, with over 27,625,300 individuals recorded, representing over half of the world’s bird species – more than 6312!
Thanks so much to Travis and colleagues for their enthusiastic participation in the Great Backyard Bird Count! We’re also thankful for the work they do as our partners in conservation through the Nature Conservancy of Canada.

By Reika Kumagai from Port Moody, BC. This story was awarded an honourable mention in our 2018 Great Backyard Bird Count Story Contest.

It was a sunny and chilly day, and also a fine day. Although, it wasn’t exactly a full 100% good day. Probably 99.5%, because we were LATE.
Finally we reached the Noons Creek Salmon Hatchery, but … the door was LOCKED. So we scampered along one trail and didn’t stop until we saw a peach-shirted woman, the caboose at the end of a group. We stopped there, panting.
The caboose lady looked friendly and she had a clipboard in her hands. It held a piece of paper that she used to record the birds they saw.
There were about 10 to 12 people in the group, mostly women. A man held a camera, searching for signs of birds like Black-capped Chickadees and Dark-eyed Juncos. The count was on.
The first bird my mom, dad, brother, and I spotted was skipping on a gravel bed off the ocean, brown and white feathers shuffling.
The wind above the ocean was strong, blowing everyone’s hats and hair. Several geese swam swiftly and elegantly on the cold, dark water in groups. Two fluttered into the open, blue sky, honking loudly like a firetruck in an emergency.
Some gulls were perched on the riverbank, their chests puffed toward the ocean. It was grassy, and looked soft. Probably a perfect place for sleeping.
We went on, and found a few people in our group staring at a bush of English ivy.
“What are you doing?” I asked curiously.
“Shh!!” A red-shirted woman hushed me. “We’re waiting for a Spotted Towhee … It just popped out its head …”
A few silent minutes later, and a black head appeared. Then the towhee hopped toward the bushes.
“One Spotted Towhee!” exclaimed a woman, checking the piece of paper.
Then we spotted some other birds, like American Robins, Black-capped Chickadees, and Mallards.
Finally we went to one of the group members’ backyards. A really nice one. We were planning to spot an Anna’s Hummingbird, the smallest of our birds.
Then we saw it: a small Anna’s Hummingbird perched on a feeder.
“Yes!” The woman with the piece of paper cried. “About 25 species, including that hummingbird!”
I had a fantastic time at the Great Backyard Bird Count.
Reika is nine years old, and a naturalist. She spends a significant portion of her free time studying animals and plants or writing about them. We’re so glad she and her family joined us for the Great Backyard Bird Count in Port Moody, and that she shared her story!

Friends of a Feather

By Rob Mueller from Toronto, ON. This story was awarded an honourable mention in our 2018 Great Backyard Bird Count Story Contest.

Things like the Great Backyard Bird Count have given my wife Angie and me another reason to get outdoors and enjoy nature – more specifically, the birds. The GBBC has also given us a reason to get out with friends.
This year, 2018, we went out with our friends Jim and Lynda Mackiewicz. Thanks to meeting Jim and Lynda about a decade ago, we learned about Bird Studies Canada, Project FeederWatch, and other Citizen Science programs; they own a seed store near our home, and participate in some of the programs that Angie and I have joined. We discovered their store when we first started getting into the birds.
The last few years, we’ve all been rather busy with our lives, and we had not gone out birding together in quite a while. It was a great day out on the Sunday of the GBBC. We hit nearly 40 species in our more ‘for fun’ than ‘serious’ bird outing, starting in Toronto and heading down to the Niagara area. Highlights included seven unexpected Turkey Vultures, three Bald Eagles, a Brown Creeper, a Red-bellied Woodpecker, a first-of-year Red-winged Blackbird, and two species of owl (Long-eared and Eastern screech). The outing was a reminder of the fun we all have together, and how we all became such good friends.
We ended our outing with a nice late lunch, and Lynda had her first margarita ever, toasting the reunion of friends and partaking in the GBBC once again.
Many thanks to Rob for sending us this story, and for all he and Angie do for birds as Citizen Scientists. And yes, why not have some fun with friends at the same time? We like their style.