Good News for Cerulean Warblers and their Forest Homes 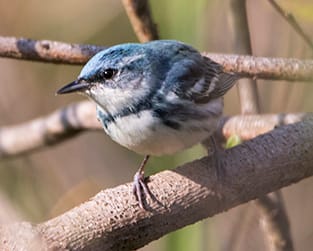 On July 17, the U.S. Fish and Wildlife Service announced that the Neotropical Migratory Bird Conservation Act (NMBCA) fund will, once again, support Bird Studies Canada’s efforts to conserve the Endangered Cerulean Warbler in Ontario.
Since the 1960s, the Cerulean Warbler has undergone serious continent-wide declines. In Ontario, declines have been most severe in the province’s southwest, where, between the first and second breeding bird atlases (carried out from 1981-85 and from 2001-05), the chances of encountering a Cerulean Warbler were reduced by half.
Today, almost all of Canada’s Cerulean Warbler population (about 500 pairs) breeds in two areas: the Frontenac Arch in eastern Ontario, which supports the bulk of the species’ population (300 pairs), and the Carolinian Region in southwestern Ontario. The species’ persistence in the Frontenac Arch is perhaps not surprising. This is the only area in Ontario where extensive tracts of mature deciduous forest – upon which the Cerulean Warbler depends – remain. A large part of the area is protected by two landowners: Ontario Parks and Queen’s University. However, in the Carolinian Region, which supports a smaller but significant population (roughly 80 pairs), there is little mature forest left, and what remains is highly fragmented and threatened. Fortunately, there are many private and public landowners in the area who are interested in conserving habitat for species at risk.
With funding from the NMBCA over the next two years, Bird Studies Canada will work directly with local landowners to identify and reduce threats to the Cerulean Warbler, and to conserve or enhance habitat for this species and other mature forest-dependent species at risk. Bird Studies Canada will also work with partners, including local land trusts, to identify additional ways to maintain and enhance mature forest throughout the area.
The Cerulean Warbler project is part of Bird Studies Canada’s Forest Birds at Risk program. Other program supporters include the Government of Canada and the Government of Ontario.