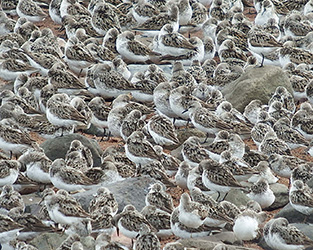 In late summer, hundreds of thousands of shorebirds stop over in the Bay of Fundy’s Minas Basin, in Nova Scotia, during their remarkable migration to South America. They require access to beaches and other coastal sites where they can rest when mudflat foraging habitat is covered during high tide. The Minas Basin is such a critical area for migratory shorebirds, it has been designated an Important Bird and Biodiversity Area and a Western Hemisphere Shorebird Reserve Network site.
The Space to Roost project is led by Bird Studies Canada in collaboration with Dalhousie University, Blomidon Naturalists Society, and provincial and federal partners. The project aims to reduce human pressures on shorebirds in the Minas Basin by assessing human-use patterns at roost sites, and working with coastal users to develop and test effective disturbance reduction strategies.
In 2016, we conducted 41 audits at four known shorebird resting sites in the Minas Basin: Evangeline Beach, Avonport Beach, Blue Beach, and ‘The Guzzle’ (the channel between Boot Island and the mainland). We noted numbers and types of coastal users, numbers and locations of shorebirds, and all disturbance events. Overall, the majority of disturbances to shorebird flocks were caused by recreational activities, particularly walkers. Concurrently, we conducted 60 interviews with recreational users, including striped bass anglers, swimmers, walkers, photographers, and dog walkers, to get a sense of the type of user at each site and their knowledge of shorebirds. Of the 60 interviewed, 48 indicated they were interested in learning more, and 17 said they would be interested in helping with the project.
With input from our partners, we decided to focus on The Guzzle and Avonport Beach in year two, as both sites had large flock sizes, a high number of disturbances, beach area that was under-used by humans and could be set aside for roosting flocks, and engaged local recreational users.
In the spring of 2017, we reached out to the interviewees from 2016 who had indicated an interest in the project, and also conducted an online survey of striped bass anglers who fish at The Guzzle. We wanted to know whether these users would be open to setting aside a stretch of beach at each site, from two hours before to two hours after high tide, in August. The majority agreed that this would not be a problem.
During the last week of July, we distributed handouts to local businesses with details about the project, tips for sharing the beach with roosting shorebirds, and a tide chart to indicate when roosting shorebirds would be present. On August 1, we installed access point signs at both beaches, which describe the project and encourage readers to take an attached handout in French or English. We also installed signs at either end of the beach areas we hope users will avoid from two hours before to two hours after high tide.
Thus far, the signs and handouts have been enthusiastically received, with overwhelmingly positive feedback for the project. We’re hoping that this enthusiasm and engagement results in a decrease in disturbance events this year!