Give a Gift for Canada’s Birds on Giving Tuesday 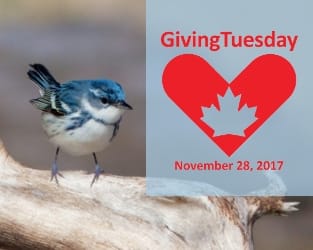 Giving Tuesday is a growing global movement that celebrates the spirit of giving. Last year, an estimated 6.7 million Canadians took part and supported their favourite causes. We hope you’ll join in on Tuesday, November 28, 2017, and consider dedicating your Giving Tuesday gift to bird research and conservation.
Your Giving Tuesday donation to Bird Studies Canada will support work to conserve habitats and birds across the country, like the Cerulean Warbler. Right now, this songbird is wintering in the northern Andes region of South America, but in spring, it will return to breeding sites in eastern North America. It’s a stunning bird, and one that can be hard to see because it spends much of its time high in the tree canopy.
The Cerulean Warbler might be even harder to spot in future, because its population is in significant decline. In North America, population size has decreased by 72% since the 1970s. Massive deforestation on the wintering grounds is a major threat. Additional habitat loss and fragmentation on breeding grounds is only making the problem worse.
Canada’s Cerulean Warbler population consists of only about 500 pairs, nearly all of which breed in two areas in Ontario: the Frontenac Arch and the Norfolk Sand Plain. The species has completely disappeared from some of its former breeding sites. The Committee on the Status of Endangered Wildlife in Canada reassessed the Cerulean Warbler as Endangered in 2010 (it was previously considered a species of Special Concern). Just this year, it was listed as Endangered under the federal Species at Risk Act.
Thanks to supporters like you, Bird Studies Canada has already achieved many milestones along the road to conservation. For example, we have:

Giving Tuesday is not only a time to help, it’s a time to say “thank you.” We’d like to thank you, our supporters, for the many ways in which you take action for birds. Whether you volunteer your time, provide financial or in-kind support, or share Bird Studies Canada’s work with others, you are a critical part of our conservation success.
Would you like to support bird research and conservation in honour of Giving Tuesday? Make an online gift to help the Cerulean Warbler and the other amazing birds that make their homes in Canada.
Online gift store Nature Unboxed is also supporting birds for Giving Tuesday. Ten percent of each sale from Saturday, November 25 through Tuesday, November 28 will be donated to Bird Studies Canada – a great motivation to shop!