Getting to Know the Mysterious, Increasingly Less-Common, Common Nighthawk 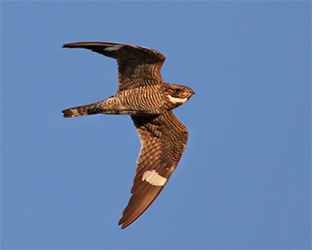 The Common Nighthawk looks graceful in flight, and a bit strange up close due to its large eyes and wide mouth. But no matter how you look at it, this species is becoming a less-common sight. Breeding Bird Survey data suggest it has declined by 76% since 1973 in Canada, where it is now listed as a Threatened species.
We know that Common Nighthawks are aerial insectivores, foraging on the wing at dusk. We also know they breed in open forests, grasslands, urban areas, and other sparsely-vegetated landscapes. Factors contributing to their decline likely include habitat loss and alteration, pollution, collisions with vehicles and human-made structures, predation by cats, extreme weather events, and climate change. But many mysteries remain about the Common Nighthawk.
Bird Studies Canada is involved in two initiatives to increase understanding of this species – an important step toward effective conservation. If you live in Toronto, you can help! (See ‘Toronto Nighthawk Watch’ below.)
‘Strangers in the Night’ Research Project
A collaborative research effort is underway to gain knowledge of where Common Nighthawks go throughout the year, and how this may relate to population declines and inform conservation action. Researchers are tagging birds with GPS-satellite tags in British Columbia, Northwest Territories, Ontario, Québec, South Dakota, Texas, and Yukon, and plan to tag more in Nevada, New Brunswick, and Saskatchewan. Nighthawks captured in Ontario are being tagged with Motus Wildlife Tracking System tags, in addition to GPS-satellite tags.
By combining GPS-satellite and Motus technologies, researchers will be able to analyze detailed information about the birds’ locations throughout the year, from their breeding sites, to wintering sites in South America (from GPS). They will also obtain accurate information about the timing of post-breeding and migratory movements for Motus-tagged birds moving through areas where Motus receiving stations are present.
You can keep up with this project by following #strangersinthenight or #nightjar on Twitter. Results will be shared in peer-reviewed publications and on the Motus website in 2018.
Project partners include Environment and Climate Change Canada, Smithsonian Migratory Bird Center, and the University of Alberta.
Toronto Nighthawk Watch
Common Nighthawks can be challenging to monitor. They are not active in the mornings when most bird surveys occur, and their incredible camouflage makes them difficult to spot during the day.
Since 2014, the Toronto Nighthawk Watch has aimed to fill information gaps about this elusive bird through monitoring during its southbound migration period. In late summer, the birds migrate in large groups at dusk and can be seen more easily. Nighthawk Watch counts take place each evening from 7 p.m. until dark from August 21 to September 7, weather permitting, at High Park’s Hawk Hill (just north of the Grenadier Restaurant parking lot). We are looking for volunteers at all birding skill levels to help keep the watch going! If you are interested in watching for nighthawks in Toronto’s west end for a night or two during our survey dates, please check out the Nighthawk Watch survey protocol. To sign up, contact Bird Studies Canada’s Emily Rondel at erondel@birdscanada.org.