Getting the Big Picture with eBird 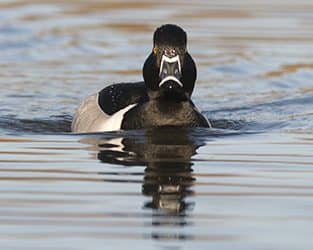 If you’ve been involved in the world of birding since 2002, then you’re very likely familiar with eBird. But for those who aren’t, here are some quick facts about this versatile tool:

While eBird is a fun and helpful tool for birders, allowing them to share sightings, track down a lifer, or even create a social profile (all on mobile, I might add), it also has the potential to unlock breakthroughs critical for understanding and conserving bird species.
Birds Canada is currently working toward this goal by adding a vast amount of data collected in remote areas of the Boreal Forest to eBird. Because eBird relies on birders to go out and gather information, birds in many less-accessible areas of our country are under-reported. This leaves gaps in our knowledge of where birds go and when.
This is a big problem when it comes to the Boreal Forest, because this huge zone is massively important for our hemisphere’s birds. Billions of individual birds fill the boreal each breeding season, including 80% of waterfowl species, 63% of finch species, and 53% of warbler species in North America – it is often aptly referred to as a bird “nursery.” Having a rich and detailed understanding of how species use boreal habitats is therefore essential for their conservation.
The major input of data into eBird from Birds Canada’s provincial breeding bird atlases will give researchers the power to understand much more about boreal-breeding birds. So far, roughly 590,000 records have been added, and this is just the very beginning. Such a large volume of information will allow scientists to use sophisticated modelling techniques to achieve year-round, continental-scale monitoring of many species.