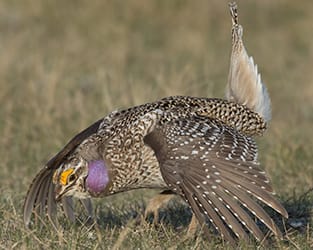 Bird Studies Canada is now accepting applications to the James L. Baillie Memorial Fund for the 2018 grant cycle. A portion of the money raised through our annual Great Canadian Birdathon is allocated to the Fund to provide grants for bird research and conservation projects by individuals or groups.
Since 1978, the Baillie Fund has provided grants totaling nearly $770,000 to over 600 projects across Canada. The independent Baillie Fund Trustees give priority to projects that engage the skills and enthusiasm of amateur naturalists and volunteers to help us understand, appreciate, and conserve Canadian birds in their natural environments. The Trustees also help allocate the Ontario Eastern Bluebird Society Award and the Ontario Bird Banding Association’s Wasserfall Award.
There are three granting programs, each with a different application and review process. Regular Grant applications are due by December 15, 2017; Small Grants applications, by January 15, 2018; and Student Award applications, administered by the Society of Canadian Ornithologists, by February 15, 2018.
The Baillie Fund is far-reaching. The information gathered and the outreach achieved facilitates conservation efforts, ensuring that, together, we can help safeguard Canada’s natural heritage for future generations. Its scope is brilliantly reflected in the diversity of projects that were funded this year.
For example, out in the Pacific, support to Laskeek Bay Conservation Society on Haida Gwaii helped engage youth in ornithology and work on endangered species. A little farther south, support to Halpin Wildlife Research is helping identify critical foraging areas used by Fork-tailed and Leach’s storm-petrels on their breeding and post-breeding grounds. On Vancouver Island, work by the Cowichan Valley Naturalists’ Society is ensuring the long-term monitoring of a successfully reintroduced population of Western Bluebirds, which was also facilitated by the Baillie Fund.
On the mainland, Wildsight Golden has been working near Banff National Park, collecting data to support the nomination of the Columbia Wetlands as an Important Bird and Biodiversity Area. In Alberta, support to Shonna McLeod allowed replacement of materials at her MAPS (monitoring avian productivity and survivorship) station, allowing her to continue gathering new data on birds in her area. Also in the Prairies, the Baillie Fund helped the Saskatchewan Breeding Bird Atlas take off. This multi-year project, involving hundreds of volunteers, will inform land and wildlife managers, and focus effective conservation efforts in the province.
In Québec, funding supported the bird observatory recently established near Rimouski, offering the local urban community a direct contact with birds. On the other side of the St. Lawrence, the Baillie Fund helped the Observatoire d’oiseaux de Tadoussac develop a novel monitoring program for neotropical passerines. Out on the Atlantic coast, it supported capacity-building work by the Island Nature Trust, on Prince Edward Island, to engage volunteers in Ruby-throated Hummingbird monitoring.
For more information about Baillie Fund grant programs, past grants, and how to apply, visit our website or contact the Baillie Fund Secretary at acoughlan@birdscanada.org or 1-866-518-0212.