From the Field: Shorebird Research at Bahia Lomas, Chile 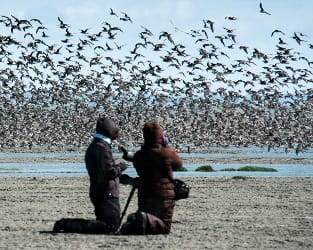 Not long ago, Pete Davidson brought you the story of the rapidly declining rufa subspecies of Red Knot, and collaborative efforts to study and save it along its migratory path. You may recall that Bird Studies Canada and international partners met in Chile earlier this year to conduct intensive field research as part of these efforts. I was among those on the expedition, and I’m excited to share my field notes with you.
For the Red Knot and some of its companions in the long-distance migration hall of fame, like the White-rumped Sandpiper and Hudsonian Godwit, southward migration ends in a “land of fire.” The Tierra del Fuego archipelago was named for the fires of the Yaghan people that were observed by European explorers in the early 16th century. Native fires have since been replaced by gas flares (from a very active fossil fuel extraction industry in the region). It is a wind-swept, remote landscape, void of virtually any trees except where they have been planted around homesteads for shelter. The coast is vast and largely inaccessible under constant patrol of marauding Chilean Skuas and Southern Giant Petrels. Mudflats stretch for kilometres. The only sign of humankind are numerous offshore oil platforms.
On the eastern coast lie numerous estuaries and bays that have excellent habitat for shorebirds, the most notable of which is Bahia Lomas. Historically, this bay’s rich and extensive mudflats, and oyster and mussel beds, supported as many as 150,000 Red Knots and hundreds of thousands of other shorebirds. Bahia Lomas was designated part of the Western Hemisphere Shorebird Reserve Network in 2009 as a site of hemispheric importance, supporting more than half of the rufa subspecies of Red Knot and serving as the second most important wintering site for Hudsonian Godwit. Bahia Lomas is also an incredibly important wintering site for White-rumped Sandpiper and resident species, such as the Magellanic Oystercatcher.
Despite the potential for Bahia Lomas to be one of the most important wintering sites for Red Knots, we know virtually nothing about the basic ecology of wintering populations. A greater understanding of their habitat preference and use could greatly increase our ability to predict and respond to potential environmental or anthropogenic threats, and to compare the relative importance and stability of staging and wintering sites throughout their range.
To begin addressing this knowledge gap, an international team representing Bird Studies Canada, Universidad de Santo Thomas (Chile), Centro Bahia Lomas (Chile), Conserve Wildlife Foundation of New Jersey (U.S.), New Jersey Department of Environmental Protection (U.S.), and Rutgers University (U.S.) organized a research expedition for January 2018.
The crew assembled in Punta Arenas on January 14 and quickly dispersed around the bay. The goals of the expedition were multifaceted. Aerial surveys and photography were used to conduct annual counts for Red Knot and other species, and to document their locations. At the same time, ground crews surveyed the sites, collected (ground-truth) data on flock locations to which the aerial photographs could be compared, and sampled the substrate, which will enable the development of critical habitat models for Red Knot habitat across its range.
Aerial and ground surveys confirmed that fewer than 10,000 knots were using Bahia Lomas this winter – the lowest number ever recorded, and a fraction of the historical numbers. Previous research suggests that Red Knot declines could be related to the reduced abundance of Horseshoe Crabs, and changes in the timing of their egg-laying, on Delaware Bay in the U.S. (an important staging site for Red Knots).
Elsewhere around Bahia Lomas, crews were busy establishing an array of automated radio telemetry stations connected to the Motus Wildlife Tracking System. Centro Bahia Lomas has been working in the region for over a decade, monitoring shorebird populations, providing education and outreach, and establishing critical relationships with landowners. Our efforts would have been impossible without this long-standing effort.
Once the stations were up and running, the crew assembled for the monumental task of banding and affixing leg flags and radio-tags to more than 100 Red Knots and Hudsonian Godwits. The Motus stations immediately lit up, recording unique signals from the radio-tags about every 10 seconds. Stations were strategically positioned around the bay with the aim of tracking the tagged birds 24/7, which will allow us to determine preferred areas and timelines for foraging and roosting, and identify priority areas for conservation or for protection in the event of an environmental disaster. We’ll also determine exactly when the birds depart on their northbound migration this spring, and hopefully detect them en route and when they arrive at other important staging areas.
Our relatively small trapping effort resulted in some remarkable discoveries. We captured 10 birds that had previously been flagged elsewhere in the hemisphere, and some that had been caught during previous work in Chile close to 10 years ago! One knot in particular, red flag code “ALE,” had a uniquely Canadian connection. Bird Studies Canada biologist Ross Wood had observed this individual three months earlier on the coast of James Bay. He was fortunate enough to encounter this bird again, and to hold and collect information from it nearly 10 years after it had originally been banded in Chile. The team also retrieved a geolocator that was likely deployed in South Carolina as part of a long-running concurrent study.
Over the coming months, data will continue to be collected throughout the Motus network before being compiled and analyzed through the fall and winter. We look forward to reporting back. We hope to be able to continue this important work in Bahia Lomas and at other critical staging and wintering areas in South America.
The expedition was generously supported by the National Fish and Wildlife Foundation, the Neotropical Migratory Bird Conservation Act, Environment and Climate Change Canada, Western Hemisphere Shorebird Reserve Network, and the International Conservation Fund of Canada.
Learn more about what Bird Studies Canada and our BirdLife International partners are doing to help migratory shorebirds along the Atlantic Flyway.