Environmental Organizations Urge the Government of Canada to Invest in Nature 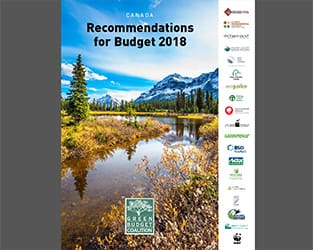 On September 18, 2017 the Green Budget Coalition – an alliance of 19 of Canada’s leading conservation organizations, including Bird Studies Canada – released its recommendations for 2018. Its message is clear: the time has come for serious federal investment in Canada’s ecosystems and species, which are central to Canadians’ well-being and prosperity.
“All ecosystem types in Canada are declining, and the number of species at risk continues to grow, year after year,” the Green Budget Coalition states in its ‘Recommendations for Budget 2018’.
The Coalition notes that, despite the promises of successive governments to meet our international commitments to protect at least 17% of land and inland waters and 10% of ocean by 2020, Canada still has a long way to go, having protected only 10.6% of land and freshwater and one percent of the ocean, and ranking last among G7 countries in terms of terrestrial protected areas.
“The federal government has already made important commitments towards tackling climate change,” said James Brennan, Green Budget Coalition co-chair and director of government relations for Ducks Unlimited Canada. “We believe that the government must now address the urgent crisis unfolding in Canada’s natural environment with sizable new investments to safeguard residual natural areas, to restore lost or degraded habitats in highly threatened landscapes, and to uphold the Pan-Canadian framework on Climate Change and Clean Growth.”
Many of the Coalition’s specific recommendations – including new investments for protected areas, sustainable agriculture, sustainable fisheries, and international climate change financing – are highly relevant to bird conservation and will help sustain the ecosystems upon which birds and humans depend.
“The expansion of Canada’s natural areas network will help safeguard habitat for species at risk and will play an important role in helping mitigate the effects of climate change,” said Becky Stewart, Bird Studies Canada’s Ontario Program Manager. “Further, supporting sustainable agriculture will help conserve biodiversity and prevent habitat loss, particularly for our grassland birds, while simultaneously supporting farmers and increasing opportunity for rural community development.”
Another important recommendation is to enhance funding for the implementation of Canada’s Species at Risk Act, including funding for key habitat stewardship and conservation programs whose funding is set to expire over the next two years. This renewed support is critical to ensuring continued recovery efforts for endangered and threatened wildlife across Canada.
See a complete description of the Green Budget Coalition’s recommendations.