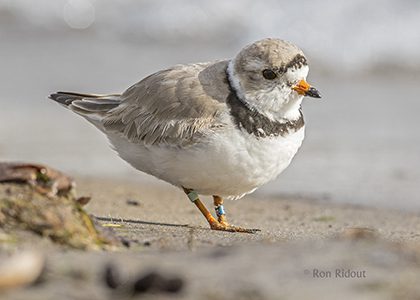 Norfolk County, Ontario played host to a very special visitor on Tuesday, April 11 and Wednesday, April 12, 2017. On Tuesday evening, Sheila Chevarie of Port Dover was walking the beach in that town when she spied a small shorebird that she did not immediately recognize. Pictures she posted to the Ontario Birds Facebook page confirmed that she had found a very rare and nationally endangered Piping Plover.
Nearby Long Point was once a stronghold for breeding Piping Plovers but the species has not nested here since the 1970s. Yet, there is hope, as the species has returned in recent years to nest on a few sandy beaches on Lake Huron and Lake Ontario.
Sheila’s photos also showed that the bird sported some coloured bands on its legs. A little sleuthing revealed that this was not just any Piping Plover but none other than the oldest-ever male Piping Plover recorded on the Great Lakes. He’s known as BO-X g or, more colloquially, as ‘Old Man Plover.’
Old Man Plover hatched at Sleeping Bear Dunes National Lakeshore on Lake Michigan back in 2002. He has been nesting there every year since 2005 and has successfully raised 36 chicks. He spends his winters on Bulls Island in the Cape Romain NWR, South Carolina. Given his age and the 15 round trips from Michigan to South Carolina, that would be well over 45,000 km (or 28,000 miles) he has flown – more than once around the Earth!
This is a wonderful example of the valuable information that can be garnered from colour-banded birds. Congratulations and thank you to Sheila Chevarie for discovering the bird and posting her photo online. Thank you to Alice Van Zoeren of Michigan for the background information on this bird. And good luck Old Man Plover on the rest of your journey home!
Update! We have just learned that Old Man Plover arrived back at Sleeping Bear Dunes National Lakeshore today (April 13) after a 530 km overnight flight. What a great example of the value of being able to identify individual birds. Well done Old Man Plover!