The gifts you make through Bird Studies Canada support important work for birds across the country. Thank you for your generous contributions!
The James L. Baillie Memorial Fund is one way your support is put into action. The fund channels proceeds from the annual Great Canadian Birdathon and private donations to critical bird research and conservation projects. Baillie Fund grants are awarded competitively to successful applicants by independent trustees. Since 1978, 639 grants totalling over $815,000 have been awarded!
We’re pleased to announce this year’s James L. Baillie Memorial Fund grant recipients! Take a look at these important bird research and conservation projects, soon to be conducted across Canada with Baillie Fund support. Please note that the Fund’s trustees also help the Ontario Bird Banding Association and the Ontario Eastern Bluebird Society allocate their annual awards. As these may be awarded jointly with Baillie Fund grants, they are included in the list of funded projects.
The Baillie Fund is named in honour of naturalist, educator, and conservationist James L. Baillie. Baillie was Assistant Curator of the Royal Ontario Museum’s Ornithology Department for nearly 50 years. His enthusiasm for birds and conservation was infectious, and continues to live on in the work of the dedicated researchers and volunteers who receive grants each year.
Please visit our website for more information about the fund, including how to apply. 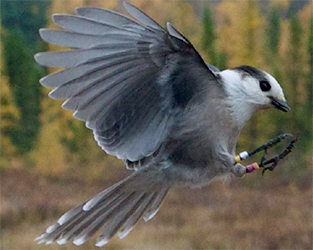 Last year’s winner of the Baillie Fund Student Research Award, co-administered by the Society of Canadian Ornithologists and Bird Studies Canada, is a great example of a project that your support made possible. For this project, awardee Alex Sutton from the University of Guelph investigated causes of population decline in Canada Jays living in Algonquin Park, Ontario.
“Canada Jays are remarkable and resilient birds that are a year-round resident of North America’s boreal forest,” says Alex. “Canada Jays are able to survive harsh winters and even begin to breed in the late winter, long before most migratory birds have even started to arrive! During these harsh conditions, Canada Jays rely on food that was previously cached in the late summer and fall.”
Unfortunately, the results of long-term monitoring show that the Canada Jay population in Algonquin Park has declined by more than 50% over the past 30 years.
“Using demographic data collected over the past four decades, I found that both the number of offspring produced and juvenile survival contributed most strongly to changes in population growth rate,” explains Alex. “This suggests that the population decline is likely being driven by a lack of juvenile recruitment into the population. In other words, fewer young are being produced over time and fewer young are surviving long enough to join the population and breed.” Freeze-thaw events in the fall and temperature during the breeding season also appeared to have strong effects on population growth.
Why does this matter? Alex says, “My work helps to understand how climate change is influencing a population of Canada Jays living on the southern edge of their range. This is important, as it could be used to predict future declines of more northern populations. Further, combining long-term data with advanced modelling approaches provides evidence for the drivers of the observed population decline and can be a powerful tool used to understand population dynamics of wild species.”
Alex gratefully acknowledges the role of Baillie Fund support in bringing this project to light. “Funding allowed me to participate in collecting data for one of the longest running field studies in North America.”