Conservation is a Team Effort during the Great Canadian Birdathon

Birdathon month is here, and we couldn’t be more excited! Last year’s Great Canadian Birdathon was a huge success, with more than 400 participants and 4000 supporters raising over $226,000 for bird conservation efforts across Canada.
Meet some of the inspiring teams who went birding for conservation in May 2016:
‘The Twillicks’ – St. John’s, NL 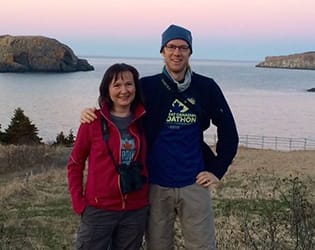 Last year, Alvan Buckley and Catherine Barrett wanted to beat their record of 92 species in one day. The weather was working against them, but determination, skill, and luck helped them beat their goal. With just two minutes left, “we spotted a single shorebird along the road … to our shock, it was a European Golden-Plover!! The day’s best bird and our 95th species for the count!” On top of that, they raised funds for Nature Newfoundland and Labrador, as well as Bird Studies Canada.

The Wild Bird Care Centre and Tony Beck – Ottawa, ON 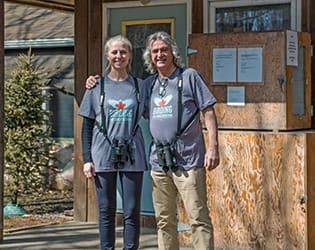 Led by Guest Birder Tony Beck, this team braved chilly, rainy weather to raise money for wild bird rehabilitation and Bird Studies Canada. “The highlight of the day was the blue morph Ross’s Goose that we spotted at the Alfred Lagoons, and the Sandhill Crane and Yellow-throated Vireo were awesome, too. Several people on the team, including myself (Patty McLaughlin), were able to add some lifers to our list!” The final tally was an impressive 113 species, “and we worked hard for every one!”

‘The Warbler Hunters’ – Simcoe County, ON

No warblers were harmed when John Watson, Ron Fleming, Arthur Needles, Chris Dunn, and Kevin Shackleton tallied 128 species on May 22. One experience that day at Wasaga Beach stood out. While the team watched a Piping Plover forage at the edge of the area set aside to protect these endangered birds, a passerby told them she thought it was a disgrace that part of the beach was off-limits to summer residents. Imagine the shock of The Warbler Hunters! “It just showed us how important doing the Birdathon is,” said Kevin Shackleton.

Matthias and Jason Bieber – Summerland, BC

These ingenious leaders not only participated in the Birdathon, but also raised interest in birding and bird conservation by organizing a 10-hour birding event for beginners and youth. The money raised went to the Vaseux Lake Bird Observatory as well as Bird Studies Canada. The Biebers also count feeder birds for Bird Studies Canada’s Project FeederWatch, so were very pleased to win a one-year supply of bird food from Armstrong Bird Food through their participation in the Birdathon.


How big a difference will we make for Canada’s birds this May? Help us maximize our impact in 2017 by signing up as a participant or by sponsoring another birder.
Stay tuned to our Facebook page to meet some of this year’s champions for birds – we’ll soon start featuring our ‘Birdathoners of the Week!’ We also encourage you to share your Birdathon photos and stories with us on Facebook and Twitter (@BirdStudiesCan), using the hashtag #BSCBirdathon.
Thank you for being part of the Great Canadian Birdathon. Good birding!