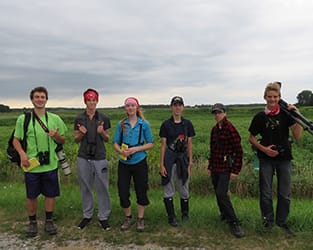 Bird Studies Canada and the Long Point Bird Observatory welcomed six enthusiastic young naturalists to our 2017 Doug Tarry Young Ornithologists’ Workshop. This year’s participants were: Logan Lalonde (Kelowna, BC), Nathan Hood (Cambridge, ON), Alessandra Wilcox (Burlington, ON), Madelaine Davies (Thorold, ON), Owen Ridgen (Toronto, ON), and Josiah Van Egmond (Winnipeg, MB). Under the leadership of professional biologists, participants expanded upon their birding interests as they learned about techniques in bird banding and tracking, and joined exciting workshops and excursions in conservation science, ornithology, and natural history. The happy campers were excited to observe a total of 106 bird species on their Big Day. They tallied a combined 39 life birds, including a rare Bewick’s Wren seen at the Tip of Long Point, as well as Hooded Warbler, White-rumped Sandpiper, Black-bellied Plover, American Woodcock, and Acadian Flycatcher.
This training program had its start in the 1970s. Thanks to the generosity and foresight of late naturalist Doug Tarry, it has operated continuously since 1994 as the Doug Tarry Young Ornithologists’ Workshop. Doug cared deeply about Long Point, young people, and the educational mission of Long Point Bird Observatory. He made a lasting contribution in the form of an endowment fund, which sustains the workshop. Each year, the Doug Tarry Student Awards are granted to six applicants aged 13-17 from across Canada. These awards cover the costs of the workshop.
To date, more than 150 teenagers have taken part. Many have gone on to post-secondary studies in biology, with several earning advanced graduate degrees. Program alumni are pursuing careers in research, conservation, environmental consulting, tourism and recreation (leading birding tours), and more. Several work for (or have worked at) Bird Studies Canada. Needless to say, there are many prominent birders in the mix!
Many thanks to the staff and friends who helped deliver this year’s workshop, providing valuable experiences to a new cohort of champions for birds. You can see more photos and highlights on the Long Point Bird Observatory Facebook page or by searching the hashtags #LPBOYOW and #YOWBigDay on Twitter.