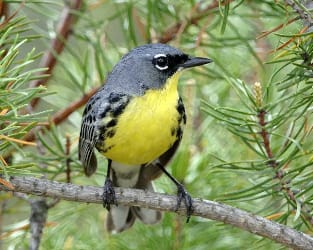 In August, Bird Studies Canada scientists Dr. Tara Crewe and Dr. Doug Tozer participated in a joint meeting of the American Ornithological Society (AOS) and the Society of Canadian Ornithologists (SCO) in East Lansing, Michigan.
Dr. Crewe presented work that improves the utility of the Motus Wildlife Tracking System for movement studies. Many talks mentioned the use of the Motus network for various research applications, reflecting the growth of the network.
Dr. Tozer presented on the importance of wetlands managed under the North American Waterfowl Management Plan for conservation of marsh birds and frogs. He also spoke about the recent rise in popularity of the journal Avian Conservation and Ecology. In addition, graduate student Matt Palumbo presented research on how ducks use the landscape at Lake St. Clair, a globally-recognized Important Bird and Biodiversity Area.
Dr. Erin Bayne (University of Alberta) gave a thought-provoking plenary talk about the relative impacts of different threats to birds. According to Dr. Tozer, “This talk raised some timely questions and made the audience really think about what matters most in the grand scheme of things for bird conservation.”
There was strong participation in the conference by Canadian scientists. The new AOS (formed in 2016 by merging the American Ornithologists’ Union and the Cooper Ornithological Society) was extremely accommodating to SCO, inviting the Canadian organization as an equal partner to this truly joint meeting. Dr. Tozer noted that it was “very encouraging to see such a positive reception of Canadians, and perhaps reflective of the future.”
The Kirtland’s Warbler was chosen to appear in the conference logo. This endangered species nests primarily in Michigan, but its restricted breeding range extends into Ontario as well, making it a fitting symbol for the Canada-U.S. meeting.
Our scientists greatly enjoyed taking part in this prestigious gathering, connecting with fellow ornithologists with similar research interests, and showcasing Canadian science.
Bird Studies Canada is now looking forward to joining the Society of Canadian Ornithologists in co-hosting another significant event: the 27th International Ornithological Congress. The congress will run from August 19-26, 2018 in Vancouver, and is expected to bring together 2000 or so participants from about 100 countries. Stay tuned for details, including upcoming registration information.
Coinciding with the congress will be the 2018 Vancouver International Bird Festival (formerly Vancouver Bird Week), which will offer a wealth of activities for bird lovers of all ages and levels of expertise.
Vancouver is the place to be in August 2018. We hope to see you there!