In March 2020, many areas began shutting down parking lots, roads, and parks to limit the spread of Covid-19. In Colwood, British Columbia (BC) the through road (Ocean Boulevard) and parking lots near Esquimalt Lagoon Migratory Bird Sanctuary and beach were closed to reduce the risk of large crowds. This closure meant a significant decrease in human and vehicle traffic in the area – the perfect opportunity to look at bird use and numbers in response to a lack of human disturbance. Birds Canada has run the BC Coastal Waterbird Survey (BCCWS) since 1999, a monthly survey conducted by hundreds of volunteers from September to April each year. Volunteer surveyors count all waterbirds and raptors within their dedicated survey area on the second Sunday of each month. One of the survey routes (Esquimalt Lagoon sanctuary) covers the area within the Esquimalt Lagoon MBS and another route that covers the outer shoreline of Ocean Blvd across from the lagoon (Esquimalt Outer side).

Three current BCCWS volunteers stepped up to do additional surveys at both survey routes in late March through the first week of April (when Birds Canada halted all field work and volunteer surveys due to Covid-19). Five surveys were conducted at both BCCWS routes that could be compared with the previous March and April surveys (18 Lagoon surveys, 19 outer surveys; years 2004, 2010-2018).

Due to small survey sample size, few statistically significant results were found when comparing average species counts between the historic “baseline” data and the 2020 “less disturbance” data, but some interesting patterns did emerge.

Pied-billed Grebe were found in higher numbers with less disturbance (statistically significant), and were seen more frequently (5/5 surveys instead of 3/18). Both Mallard and Northern Pintail average counts were lower in 2020. These two common dabbling duck species were still seen regularly in 2020, but just in lower numbers. The lack of visitors feeding ducks could mean fewer were around, or numbers could just be lower this year.

A few species had notably higher average counts, though no statistical differences were found. Common Merganser, Double-crested Cormorant, and Hooded Merganser all showed increased average count and maximum count, and Hooded Merganser were seen much more frequently (5/5 surveys in 2020 instead of 7/18). Importantly, Great Blue Heron were seen more frequently (5/5 vs 7/18) with higher numbers (up to 10 individuals in 2020 vs a max of 3 in previous 10 years of surveys).

Within the Esquimalt Lagoon sanctuary survey route, there are multiple wildlife viewing points, Ocean Blvd runs along the edge of the lagoon, and on-leash dogs are allowed along the trail between the road and lagoon. These many disturbances could all reduce the number of waterbirds using the lagoon to find food. 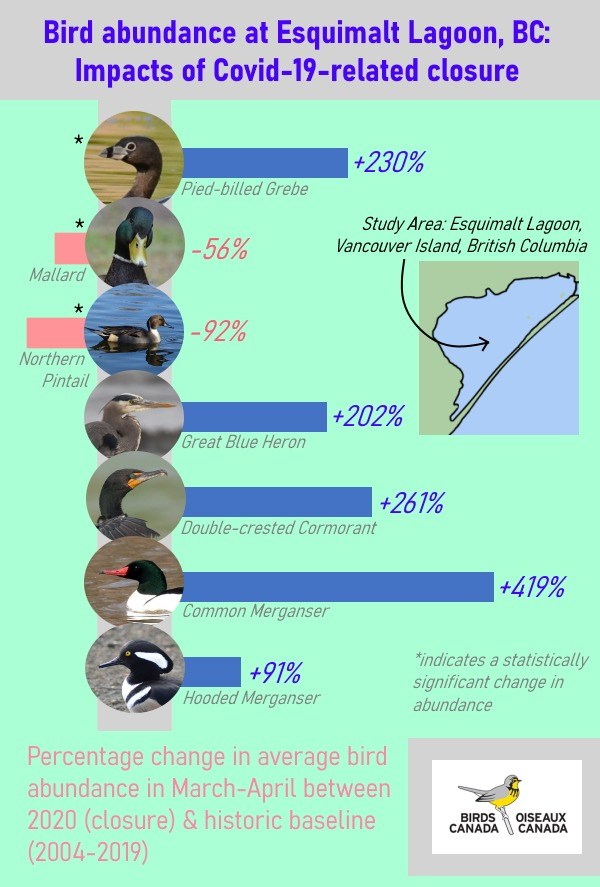 The only significant change on the Esquimalt Outer side survey was a decrease in Surf Scoter counts (average of 11 down to 3.5 in 2020). Unfortunately, this result is not surprising in light of declines of scoter species and other benthivores in the Salish Sea (BCCWS data and upcoming manuscript).

Killdeer were detected for the first time on the Esquimalt Outer side in the less disturbance surveys,  and were seen in 3 of 5 surveys. Killdeer breed on sandy and gravel surfaces like beaches and shorelines and even gravel parking lots, but often cannot breed or use these areas because they are also used by humans.

The Esquimalt Outer side has even more potential for disturbance from its popular beach, parking between the road and the beach, and an off-leash dog area on the beach south of the Esquimalt Lagoon MBS. Unsurprisingly, species like Killdeer are impacted by this disturbance, but it is interesting that offshore-feeding alcids (guillemots and auklets) also may be impacted.

Recreation and traffic has been shown before to impact birds and cause disturbance (review from Audubon here). From the few surveys completed this spring at Esquimalt Lagoon, there is evidence that birds benefitted from the reduced traffic. At the very least, these results indicate the need for further study on the impacts of traffic and recreation and Esquimalt Lagoon Migratory Bird Sanctuary so that this area can continue to provide important feeding, wintering, migratory stopover, and breeding habitat for a diversity of bird species.

The Esquimalt Lagoon Migratory Bird Sanctuary is an important sanctuary for birds and other wildlife. Many people come to the lagoon to enjoy the natural splendour of this site, but it is important to respect the wildlife when visiting. These result indicate that there may be a need to improve the management of human behaviours when visiting the sanctuary so that birds and other wildlife can continue to use this remarkable ecosystem.

The closure is planned to remain in effect until September (City of Colwood news release), so Birds Canada is looking for more Citizen Science volunteer surveyors to continue surveying these two routes (Esquimalt Lagoon sanctuary and Esquimalt Lagoon outer). Contact Graham Sorenson at gsorenson@birdscanada.org to learn more or to join the BC Coastal Waterbird Survey, whether at Esquimalt Lagoon or elsewhere in BC! 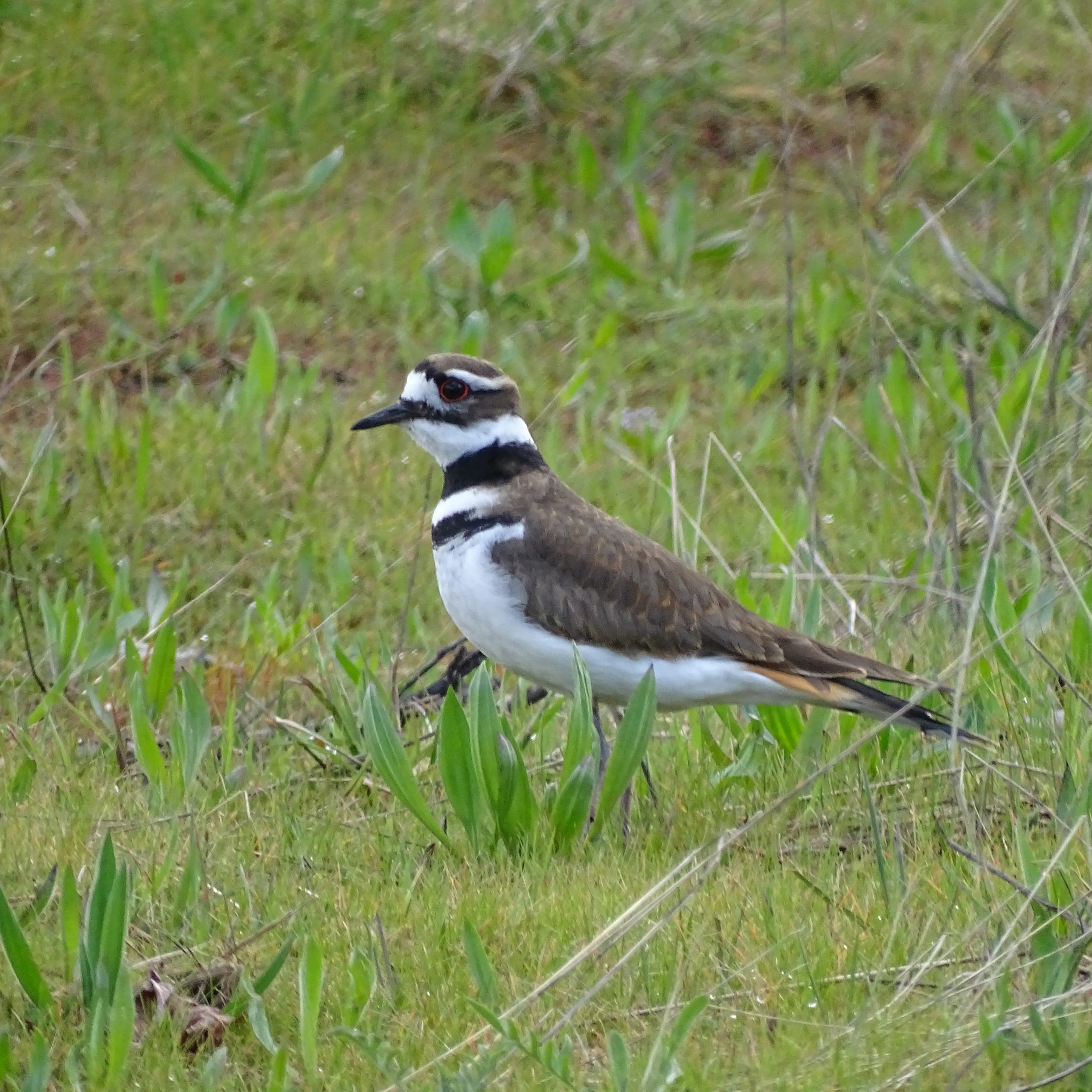