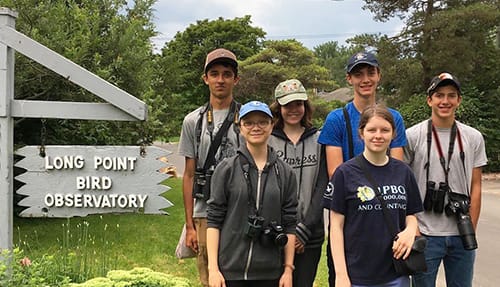 Each summer, Bird Studies Canada and Long Point Bird Observatory (LPBO) host the Doug Tarry Young Ornithologists’ Workshop (YOW) for successful applicants aged 13-17. This year, we welcomed six shining stars from Ontario and British Columbia: Jack Farley (Toronto, ON), Ethan Gosnell (Kitchener, ON), Delaney McHugh (Stratford, ON), Simeon Rodgers (Sault Ste. Marie, ON), Sasha Fairbairn (Vancouver, BC), and Rebecca Reader-Lee (Vancouver Island, BC).
These eager young naturalists embarked on a 10-day ornithological and natural history extravaganza at Long Point, Ontario, where they engaged in hands-on learning about bird banding, migration monitoring, preparing a museum specimen, identifying wildflowers, sketching birds, zip-lining, and a particular crowd pleaser, hummingbird banding. In addition the Old Cut Research Station, which is open the public during spring and fall migration, the “YOWs” were lucky enough to visit both of LPBO’s remote research stations: Breakwater and the Tip! The workshop concluded with a Big Day, during which the team undertook to see as many bird species as possible in the Long Point area in a single day (they found an impressive 85 species!).
Bird Studies Canada’s Young Ornithologist Workshop had its start in the 1970s. Thanks to the generosity and foresight of late naturalist Doug Tarry, it has operated continuously since 1994 as the Doug Tarry Young Ornithologists’ Workshop. His generous endowment fund has supported the participation of six young adults each year. To date, more than 150 participants have taken part, and many have carried their passion for birds and natural history through their education and careers in bird research and conservation, across Canada and abroad.
We wish our 2019 Young Ornithologists the best of luck in their future endeavours, and hope to see them back soon as Young Ornithologist Interns. A special thanks to the Toronto Ornithological Club for their support of this year’s YOW program. 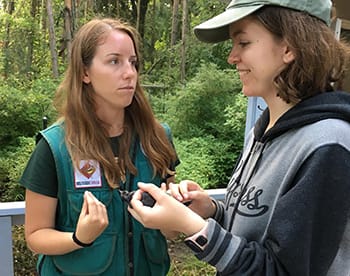 Are you interested in the 2020 Young Ornithologists’ Workshop? Applications will be due 30 April 2020. Stay tuned to Bird Studies Canada’s enews and Long Point Bird Observatory for more details.