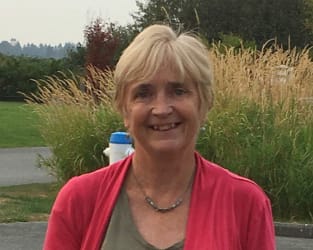 On August 27, Bird Studies Canada Board member Anne Murray of Delta, British Columbia, received a Canada 150 commemorative pin in recognition of her contributions to environmental stewardship of the Fraser River Delta.
The Honourable Carla Qualtrough (M.P. for Delta and Minister of Public Services and Procurement) conferred pins on Mrs. Murray and 19 other Delta residents (9 adults and 10 youth) at a barbeque at Diefenbaker Park. Pin recipients were celebrated for their work furthering Canada 150 goals related to diversity and inclusion, youth engagement, environmental protection, and reconciliation with Indigenous peoples.
Anne Murray was nominated for the distinction by Bird Studies Canada’s James Casey. Mrs. Murray is now into her third decade as both a passionate steward of the environment and a highly respected communicator.
In 1996, Anne Murray helped establish the Important Bird Area Program in Canada and the Caretaker network that stewards about 240 of these sites across the country. She has consistently raised issues and advocated for change, using the best available science, in her official Caretaker role for the Fraser River Estuary Important Bird Area: one of the most important places for bird in the Americas.
In addition to serving as Secretary on Bird Studies Canada’s Board of Directors, Mrs. Murray volunteers for Nature Canada, B.C. Nature, Delta Farmland and Wildlife Trust, and the Delta Naturalists’ Society. She has authored two comprehensive reference books about the natural and cultural heritage of the Fraser Delta, A Nature Guide to Boundary Bay and Tracing Our Past: A Heritage Guide to Boundary Bay, and she writes regular columns for a range of local newspapers.
Mrs. Murray has received previous recognition for her conservation work, including the John Davidson Award from Nature Vancouver, the Queen’s Golden Jubilee medal, B.C. Nature’s Elton Anderson Award, and Nature Canada’s 2015 Douglas H. Pimlott Award.
Bird Studies Canada wishes Mrs. Murray heartfelt congratulations for her latest honour, with deepest thanks for her efforts on behalf of the Fraser River Delta.