Canada Warbler Genome to be Sequenced! 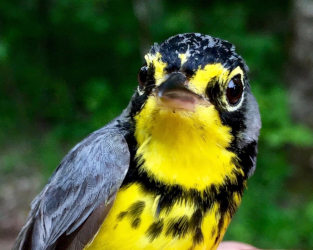 To commemorate the 150th birthday of Canada in 2017 and lay the foundation of Canadian excellence in research for the next 150 years, Canada’s Genomics Enterprise and partners have embarked upon the Canada 150 Sequencing Initiative. The aim is to sequence the genomes of 150 Canadian wildlife species to enable future research in biodiversity and conservation across Canada.
We are pleased to report that our application to have the Canada Warbler genome sequenced was successful! This is a joint endeavor with Dr. David Toews, Assistant Professor at Pennsylvania State University, and Bird Studies Canada.
Having a high-quality reference genome available will support several ongoing projects. Through the Bird Genoscapes Project, an international group of collaborators is undertaking genomic work to study population structure of the Canada Warbler and migratory routes throughout its annual cycle. Also, the Toews Lab is trying to understand the evolution and diversity of wood warblers more generally. The New World wood warblers are a family that includes the Canada Warbler and over 100 other species that occur throughout North, Central, and South America. This family has been of particular interest to evolutionary biologists and ornithologists, as it has diversified into many distinct forms with much variation in plumage and song. The Toews Lab is using genomic tools to trace the evolution of wood warblers with the aim of identifying the genes underlying several important ecological traits.
This sequencing project will be an important step towards conserving the iconic Canada Warbler, which is of significant conservation concern in Canada and can be spotted everywhere you find the Bird Studies Canada logo.