Can the Black-backed Woodpecker Keep Cool Under Fire? 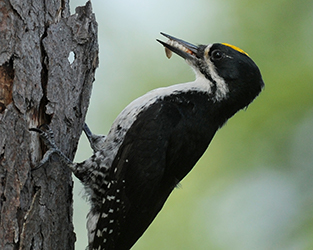 Dr. Junior A. Tremblay is involved in fascinating research into the possible impacts of climate change on Boreal birds. We spoke to him about a study focused on the Black-backed Woodpecker in central Québec that was published in 2018 and conducted in collaboration with his team at Environment and Climate Change Canada and colleagues at Natural Resources Canada.
The Black-backed Woodpecker is a resident of old-growth Boreal forest. It is considered a representative species for biodiversity in its habitat, with its abundance corresponding to overall forest bird species richness. It has been identified as potentially at risk due to climate change and its habitat within the study area is subject to pressure from commercial harvesting. Because the Black-backed Woodpecker forages on newly dead wood, it opportunistically takes advantage of areas that have been recently affected by forest fires.
Climate change is expected to increase the frequency and severity of forest fires, which one might expect to benefit the Black-backed Woodpecker. However, the researchers uncovered a more complicated story. They used a forest landscape simulation model to explore how the forest could change in response to different anthropogenic climate forcing scenarios (i.e., plausible pathways of how climate change could proceed depending on the amount of greenhouse gasses emitted going forward). They also took harvesting rates, based on data from 1980-2000, into account.
The team’s projections indicated that harvesting would have a more severe impact than climate change on woodpecker productivity for the time period before 2080. However, they also projected an overall 81-92% decline (depending on the climate scenario) in Black-backed Woodpecker productivity due to both climate change and forest harvesting by 2100. Increased fires would at first have a positive impact on productivity, but after a certain point, the effect would reverse because so many old coniferous trees would have been lost due to fire and harvesting, and likely replaced by younger deciduous trees less suitable for the woodpeckers. It appears that climate change, on the whole, is likely to be detrimental for this species.
An important takeaway message is that, in any case, the combined impacts of harvesting and climate change will be more devastating for the woodpeckers than the impacts of either factor alone. Reducing harvesting pressure on coniferous stands could allow the Black-back Woodpecker more opportunity to adapt to climate change impacts to the extent that it is able. The authors therefore recommend that forest managers implement practices that maximize the retention of large, old conifers, such as partial cutting strategies or harvesting a diversity of tree species instead of focusing exclusively on softwoods. This could do more than help the woodpeckers withstand climate change impacts. Planning up-front to retain a certain amount of old-growth forest cover in a landscape could also help foresters avoid shortfalls in the face of increasingly frequent fires, because such landscapes provide more management opportunities than those dominated by younger trees. These practices would benefit many other Boreal species as well.
Junior continues to be involved in research on climate change and Boreal birds. You can check out more of this work at researchgate.net/profile/Junior_Tremblay.
The paper referenced in this article is available to read online for free:
Tremblay, J.A., Boulanger, Y., Cyr, D., et al. 2018. Harvesting interacts with climate change to affect future habitat quality of a focal species in eastern Canada’s boreal forest. PLOS ONE. 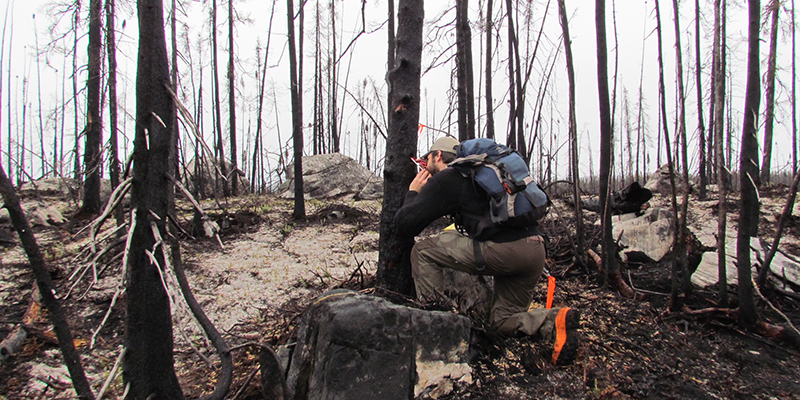