Birds Make Headlines in BC 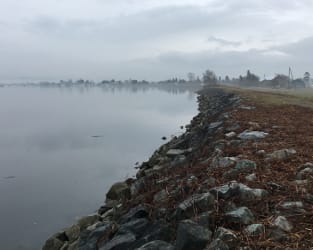 For those who follow local news in British Columbia, it would seem that birds have been cropping up a lot so far in 2018. The International Ornithological Congress and Vancouver International Bird Festival are still five months away, but we are already starting to see a number of stories featuring these promising events!
The increased attention on birds is also highlighting some serious issues around the management of birds and bird habitat. For example, Environment and Climate Change Canada recently voiced concerns about risks to Western Sandpipers and other birds posed by the proposed Terminal 2 expansion on Roberts Bank. This was closely followed by an opinion piece by Nature Canada and the University of Victoria Environmental Law Centre on the inadequacies of Canada’s Migratory Bird Convention Act, which is intended to protect migratory birds and their habitats.
But, it hasn’t all been bad news. We also saw the City of Surrey reach out to inform the community about its long-term Climate Adaptation Strategy. The strategy includes options for maintaining bird and wildlife habitat in the face of rising sea levels. You can visit the Coastal Flood Adaptation Strategy page to learn more or weigh in on options for the Mud Bay area.
The province is also taking feedback on how to modernize the management of the Agricultural Land Reserve, which may be of interest to those living in the Lower Mainland. If you would like to see bird and biodiversity values taken into consideration, now is the time to express your views.
Lastly, the City of Delta recently announced that it has developed a Bird and Biodiversity Strategy, emphasizing that Delta – along with the local governments of Richmond, Surrey, and Whiterock; and Tsawassen First Nations – manages the most important piece of bird habitat along the Pacific Coast of North America.
Conserving the Fraser River Estuary Important Bird and Biodiversity Area is a huge responsibility, and an area in which our governments have often fallen short. Because of poor past performance, the Fraser Delta now faces a number of major proposals that undermine the health of the estuary, and are leading to the destruction of bird habitats in ways that could have population-level effects. If you care about birds and the healthy ecosystems they represent, now is a good time to connect with your elected officials and tell them how important the health of the Fraser is to you.
The Roberts Bank Terminal 2 project is likely to open for public comment in only a couple of months. However, it is important to remember that it is likely the federal cabinet that will decide whether the project will proceed, so you may wish to contact your Liberal MPs now if you have comments or concerns about this project. This summer’s barbeque circuit will provide more opportunities to urge MPs across the country to ensure favourable outcomes for birds, and a healthy, functioning environment for future generations. Taking action to maintain the health of the Fraser Estuary is a good place to start.