Birding from Home – an Opportunity

Here in Canada, we are graced with the miracle of bird migration twice a year. The favorite season for many birders is spring migration, when birds look their best and match their costumes with often beautiful songs. For most birders and nature enthusiasts, the prospect of being confined to the boundaries of your property during the onset of spring migration seems like a hard pill to swallow. Another way of looking at it is that we have an opportunity to contribute unique meaningful Citizen Science data and experience the thrill of making new discoveries right from and around our homes.

You may or may not already know that each of our homes are somewhere along the migratory path of over 200 distinct bird species! Although northward migration starts as early as late February for some species, the month of May has the highest diversity of species. Hundreds of thousands of individuals of migratory birds are transiting northward from their wintering grounds and returning to the bounty of the vast Boreal forest and tundra ecosystems. That means, there is an astounding diversity of birds that may be flying over your roof, and potentially stopping over in your neighborhood.

Some of these are beautiful and colorful birds that you’d never expect to see outside of the tropics or a fancier’s cage. In this category are birds like the Northern Parula (Setophaga americana), one of 30 or so dazzling insectivorous species in the wood-warbler family (and if you think “dazzling” might be an exaggeration, I challenge you to take a look at an American Redstart, or a Townsend’s or Blackburnian warbler). An adult male Northern Parula’s plumage is composed of slaty-blues above, with crisp white arcs around the eyes and on the wings, balanced with shades of golden-yellow in the throat and an ochre-rufous necklace, punctuated with dark spots. To add a final touch of ‘bazinga’, the back has a cleanly defined moss-green saddle. Interpretation of that last colour is up for debate, since the bird was once known as the Blue Yellow-back Warbler (Parula americana) during the time of John James Audubon. As if this getup wasn’t enough, this little bird will be advertising his presence with an uprising buzzy, but totally unique, audio signature. This song sets it apart from all other species, with no questions asked. I have been lucky to witness a few wood-warblers passing through my yard in London, Ontario. Even though it is expected, and I have seen them in parks near my house, I have yet to see a “Blue Yellow-back” from my yard. If ONLY I had more time to spend in my yard. Northern Parula during migration along the north shore of Lake Erie, Ontario in May. Photo: Yousif Attia

The spectacle of spring migration at well-known migration hotspots attract thousands of birders year after year, and like birds, those who seek them can be creatures of habit. Many of us watch our backyard feeders religiously through winter, but once the migratory birds start to return, we flock to known places where we can feast our eyes and ears on as many birds as possible, usually in the company of other birders. The comradery of birding with others has its charm, but while excellent documentation has been happening at hotspots across the country, Northern Parulas, among others, are quietly flitting through our yards, often going undetected. We have an opportunity this year to supplement our understanding of the abundance and distribution of birds during migration, in habitats other than where they are concentrated due to geography. We know that most songbirds actually migrate at night and will spend their days somewhere along the route feeding and bulking up for the next leg of their journey. This spring, we have been given an opportunity to document how migratory birds are using our home environments whether they include urban, suburban, or rural habitats.

Many wild bird enthusiasts already keep a yard list. A yard list is a tally of the number of species you see from your house or yard. The birds don’t have to be on your property, so long as you are, when you see or hear them (don’t forget to use your ears to expand your detection). Those who keep these lists are very proud of them, and for good reason. There is an indescribable sense of connection when you see something truly wild so close to the place where you live. Perhaps our psyche is somehow consoled when we are reminded that we don’t have to travel far to experience the natural world. Whether it is a flyover of a majestic bird of prey like a Red-tailed Hawk, Bald Eagle, or Osprey, or even a fleeting glimpse at a skulking songbird in your neighbour’s tree, it is substantially more exciting to see these birds from home than if you had gone out to seek them. Depending on where you live, you’ll find different birds from your home. This Snow Bunting (left) and Lapland Longspur (right) are common feeder birds in Cambridge Bay, Nunavut in July. Photo: Yousif Attia

Many of us do not have a yard, or live in the middle of a large city. We know that birds migrate over and through large cities and this year we will have more time to look out for them. If your home only produces 15 species, you should be proud of all them; it’s about quality, not quantity. My most memorable yard bird moment of all time was while I was living on the 20th floor of a tiny downtown apartment in Vancouver, British Columbia. Although we did have a modest balcony, I first noticed this bird from inside the apartment. I had seen Peregrine Falcons from the apartment a few times before, but even at a distance, something was off with this bird. I got my binoculars on the bird as it approached and proceeded to dive bomb a few Glaucous-winged Gulls. It was heavier, with slightly more rounded wings and bulkier chest. “Could it be?” I asked myself as my heart rate increased and I frantically looked for my camera. The raptor approached close enough for a photo and I was thrilled to have proof that it was indeed a Gyrfalcon – the largest and rarest of North America’s falcons! Although they are generally uncommon and declining throughout their range, I have gone after Gyrfalcons across North America on a few occasions before. Until this day, however, the sighting most etched in my memory and that brought the greatest exhilaration, was the day when a Gyrfalcon came to me.

Gyrfalcon viewed by author from 20 floors up in downtown Vancouver, BC. Photo: Yousif Attia

What you can do! Join me, along with bird enthusiasts from across Canada, and spend 10 minutes or more eBirding from your home. 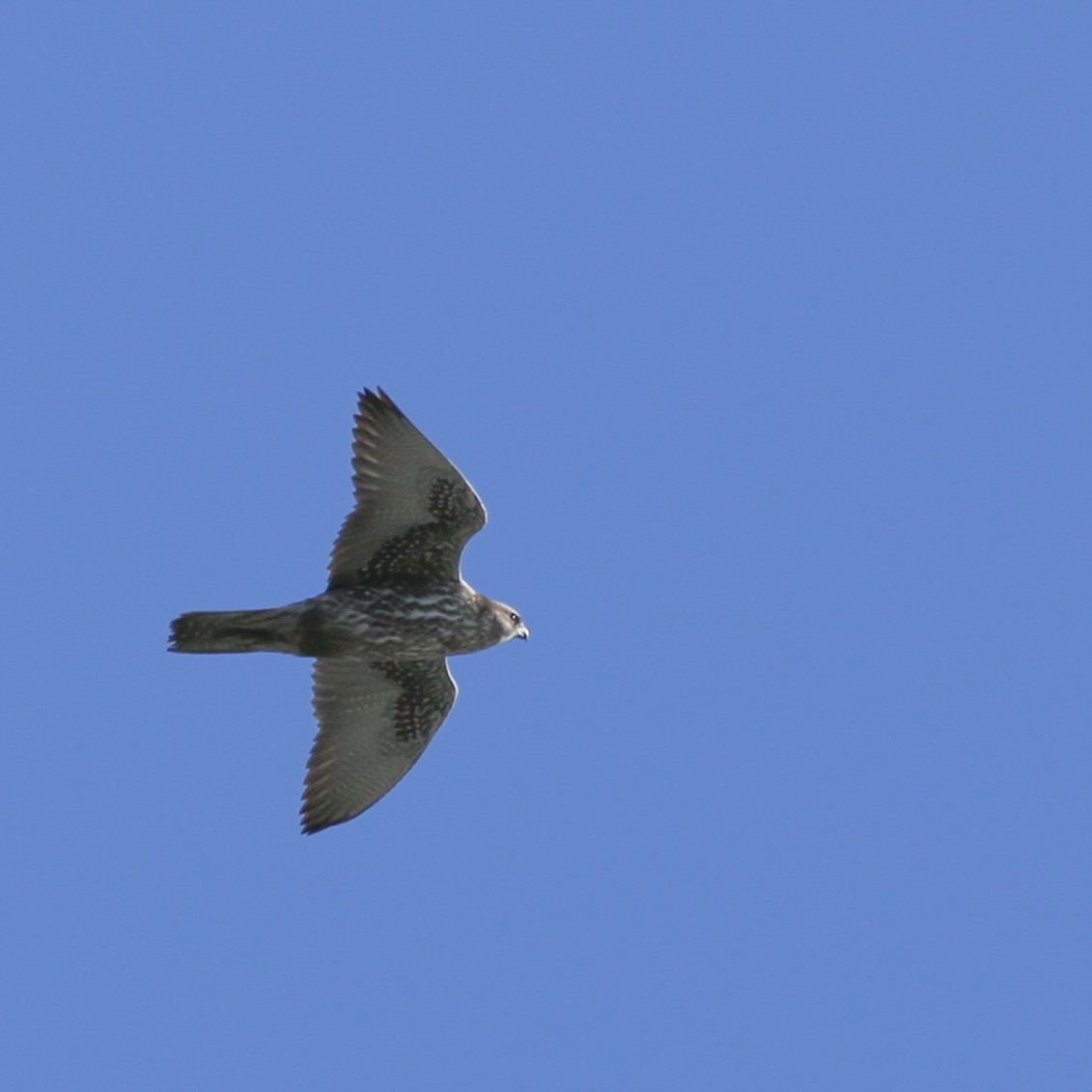