Birdathon: A Lifeline for Bird Research and Conservation in Canada 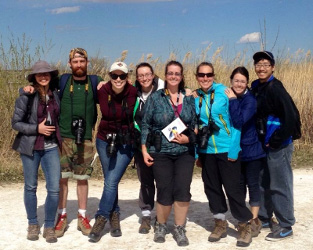 Amélie (third from left) with some of the Raven Lunatics.

To say that I take the Great Canadian Birdathon seriously is an understatement. Most of my conversations leading up to or during the month of May typically revolve around recruiting new members and planning my team’s route and itinerary. This year, I will even be travelling across the Prairies, from Edmonton to Winnipeg, to participate in my seventh Birdathon!
To many, the Birdathon may seem like just another big day of birding. However, it’s so much more. It’s a lifeline for many ornithological organizations in Canada.
I have worked for a member of the Canadian Migration Monitoring Network, the Beaverhill Bird Observatory, and attended migration monitoring network meetings where members provide updates on their station. These updates include an overview of each station’s income, and this is where my eyes were opened to the importance of fundraising events like the Birdathon. So many stations rely on these funds to continue their annual operations. For many bird observatories in Canada, the Great Canadian Birdathon is the single most important annual fundraising event, making up the clear majority of the financial resources for the organization. Participating in the Birdathon annually is just one small contribution that can be made to support the continuation of bird conservation and research in Canada.
Last year, my team, the Raven Lunatics, fundraised for Delta Marsh Bird Observatory. The funds we raised allowed for a new building for bird banding to be built. We accomplished this by having a 27-member team, birding for almost 20 hours, and spotting 148 different species of birds! Our original goal was to see 150 species of birds to celebrate Canada 150. Although we came short of 150, because Manitoba joined confederation in 1870, we still identified a species for every year that Manitoba was part of Canada!
Every year, we set a new goal. This year, the goal for the Raven Lunatics is to create a team of at least 50 members that spans Canada, meaning we will have a team member participating in each province and territory.
For me, one of the most exciting parts of the Birdathon is building a community through a shared experience. This year, our team will be going out birding on May 13 in the Winnipeg area, hopefully joined by other members across Canada. We plan to tally a Winnipeg team list, and a full team list at the end of the day.
I also find that such a fun event is a great way to get bird enthusiasts of all ages out and birding with more experienced birders. Having a large team with multiple skill levels allows new birders to learn the ropes and adds to the excitement. The elation of a new birder seeing a lifer is shared by the team and the more experienced members.
Another fantastic aspect of the Great Canadian Birdathon is that every bird matters. Common species that we see regularly throughout the summer, like an American Crow, for example, lose their allure once spring burgeons and species lists return to the double digits. However, those species that you may not notice daily get thrust back into focus during Birdathon! A friend of mine recently recalled that, during Birdathon last year, a teammate called out, “Robin! Do we have one yet?!” while pointing to a stunning male singing from a tree top. I responded, “Yes! But that doesn’t mean we can’t enjoy him anyway!”
Likewise, every little bit counts. Given that our team is predominantly made up of students, it can be difficult to fundraise large sums. However, the contribution of small sums (like the equivalent of a cup of coffee), when amassed, can make a huge difference to something we all care deeply about: bird conservation and research.
I encourage you all to participate in the Great Canadian Birdathon. You can support bird conservation and research by fundraising for a local bird observatory or for Bird Studies Canada. Spread the word and wear your Birdathon t-shirt often to build excitement around your Birdathon efforts!
Amélie Roberto-Charron is Team Captain of the Raven Lunatics. Visit the team page to help them meet their 2018 fundraising goal. Thank you, Amélie, for your enthusiastic recruitment and fundraising, and for providing valuable support for bird research and conservation in Canada! Bird Studies Canada also congratulates Amélie on recently being selected Canada’s New Noah for 2018 by Wildlife Preservation Canada.