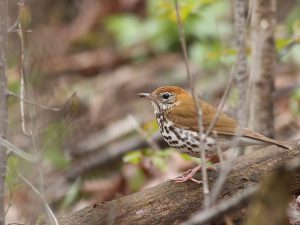 The Wood Thrush is revered for its ethereal song throughout its eastern North American range. In Canada, it is found in southern Nova Scotia, New Brunswick, Québec, Ontario, and occasionally Manitoba. It winters in the lowland forests of Central America, and rarely into northern South America.

The Wood Thrush is slightly smaller than its cousin, the American Robin. Like the robin, the Wood Thrush spends much of its time on the ground searching for food. It has white underparts, with dark speckling, and brown upperparts. The Wood Thrush nests in a variety of deciduous and mixed forests, usually with a well-developed deciduous shrub layer and a closed canopy.

The Wood Thrush is one of several declining neotropical songbirds. Results from the North American Breeding Bird Survey show statistically significant long- and short-term declines. In Canada these declines are estimated to be almost 80% since 1970, and almost 40% in the past decade. As such, it has recently been designated as a Threatened species in Canada.

Because the Wood Thrush is widespread, familiar, and in decline, it has been well studied, and many of the causes for decline are known. On the breeding grounds, it is very susceptible to cowbird parasitism, nest predation, and other negative effects caused by (or magnified by) forest fragmentation. On the wintering grounds, the biggest cause of decline is likely the ongoing deforestation of tropical lowland forests. Fragmentation of remaining forests in wintering areas may also be having a negative impact. There is still much to learn about the Wood Thrush, especially outside the breeding period. Its fall migration pattern remains something of a mystery, because birds after the breeding season become silent and can be extremely hard to find.