It was fortuitous that the millionth bird banded at Long Point Bird Observatory happened to be a Tennessee Warbler. This species breeds almost exclusively in inaccessible parts of Canada’s boreal forest, underscoring the importance of the migration monitoring methods pioneered at LPBO. By counting birds on migration, researchers can gain insights into population trends for species that are difficult to survey on their breeding grounds.

LPBO has banded 5938 Tennessee Warblers since 1960. Spring migration monitoring data indicate a population spike in the 1960s and ’70s, followed by a decline, then another upswing. How do we explain this pattern? It is likely influenced by fluctuations in spruce budworm populations on the breeding grounds.

The Tennessee Warbler is a renowned spruce budworm specialist, with breeding populations at certain sites known to increase as much as tenfold in five years in response to budworm outbreaks. The Tennessee Warbler can be the most abundant breeding species in parts of the eastern boreal when caterpillars are plentiful, with up to 500 males packing into a square kilometre. Competitive males can be heard volleying their song – a series of abrupt trills – back and forth in a show of territoriality.

Many Tennessee Warblers begin migrating to their wintering areas in Central and South America before the onset of their post-breeding moult; they are one of the only Neotropical migrants to do this. The reason behind the unusual timing is, as of yet, unknown. This warbler’s wing structure allows it to fly across the Gulf of Mexico on spring migration, whereas its close relative, the Nashville Warbler, follows overland routes.

While it’s not the flashiest songbird, the Tennessee Warbler is a robust migrant and an adroit opportunist that still holds many mysteries. For example, which geographic areas are most important for its conservation, and what are the impacts of different forest management practices on breeding success? We look forward to learning more, through research conducted at LPBO and elsewhere! 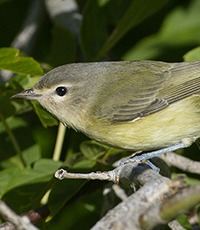