Vireos are stocky songbirds with sturdy, hooked bills. They tend to be drab in colour, usually green above and whitish or pale yellow below. Females build neat, compact cup nests in the fork of a branch.

The Philadelphia Vireo is one of the most northerly-breeding species of vireo. It is often overshadowed by its more common relative, the Red-eyed Vireo, which lives in the same areas.

All vireos prefer a habitat of dense brush and trees. They feed on berries and insects, but different vireo species co-exist by exploiting particular habitat niches. For example, Red-eyed and Philadelphia vireos maintain separate territories within forests, with Philadelphia Vireos favouring the higher vegetation.

Although the Philadelphia Vireo could be vulnerable to loss of habitat, its population seems have been increasing in the past several decades. It is estimated at 4 million birds, with the great majority breeding in Canada. It winters across Central America. 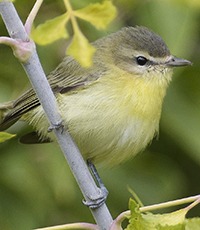