This small flycatcher may be “least” in name, but not in personality. It’s known for defending its breeding territory aggressively, attacking American Redstarts and fending off parasitic Brown-headed Cowbirds with a vengeance.

The Least Flycatcher’s fiery attitude is well-concealed beneath a bland exterior. Birders sigh in frustration over the drab plumage that makes it nearly indistinguishable from other closely-related species. A prominent eye-ring, short and wide bill, and colouring that is more gray than olive may be helpful for identification, but its voice is even more so. The species’ French name, “tchébec,” is an approximation of its quick, two-note song, sometimes compared to a sneeze.

Roughly 88% of the global Least Flycatcher population breeds in Canada. The species is found in every province and territory except Nunavut. Breeding pairs often ‘clump’ their territories in loose colonies within deciduous and mixed forests. The proximity of pairs to one another facilitates extra-pair copulations.

Least Flycatchers are widespread across Canada during the breeding season, but they are here only briefly – 64 days, at most – before returning to Mexico, southern Florida, and Central America. Adults depart much earlier than hatch-year birds, molting only after reaching their wintering grounds, which is unusual for songbirds. The younger birds trail them by about 38 days, but molt before and during the journey.

Since 1960, 20,439 Least Flycatchers have been banded at Long Point Bird Observatory during spring and fall. Only two of these banded individuals were later encountered elsewhere: one near Swiftwater, Pennsylvania in 1969 and one in Comitán, Mexico in 1982.

Breeding Bird Survey results indicate a 57% decline in population size across North America from 1966-2015. This trend is consistent with declines observed in other aerial insectivores. While the Least Flycatcher isn’t yet considered to be at risk, watchful eyes are monitoring the situation. 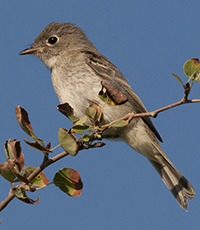