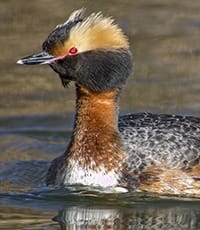 The Horned Grebe is usually seen in its black and white winter plumage, but is better known for its striking chestnut and black breeding plumage. Its ‘horns’ are actually patches of yellowish feathers (which it can raise and lower) located behind its red eyes. Its short, pointed bill is perfect for eating small aquatic animals.

Grebes have lobed (rather than webbed) feet – a feature that sets them apart from ducks and geese. Grebes’ feet are also set toward the back of their body, which is an adaptation for steering while diving.

Horned Grebes are found throughout Eurasia and North America, with 92% of the North American subspecies nesting in Canada. Within Canada, they breed in small ponds and lake inlets in parts of British Columbia, Yukon, Northwest Territories, Nunavut, the Prairie provinces, Ontario, and Québec. In winter, they can be found along the Pacific and Atlantic coasts.

While still a common species, there have been recent declines in Horned Grebe populations. The tiny isolated subpopulation in Québec is considered to be Threatened, while the rest of the Canadian breeding population is ranked as Special Concern. The biggest threat to the Horned Grebe is loss of wetland habitat. 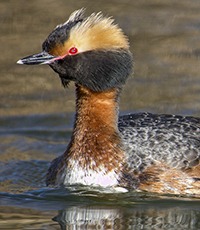