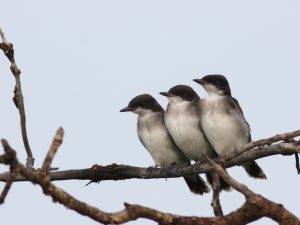 The Eastern Kingbird is a medium-sized flycatcher with white below and dark grey to black above, a large, dark head, and a white-tipped black tail. Not just a king by name, the kingbird also has a small red patch on its crown, although this feature is usually hidden and seldom seen. The kingbird perches with an upright posture on fences, posts, and treetops waiting for unsuspecting insects to fly past, at which point the bird makes a quick flight out to meet its prey, sometimes making a snapping sound with its bill. In winter, it also eats some berries and fruit.

In the breeding season, kingbirds are commonly found in open habitats, such as fields, pastures, grasslands, and wetlands. Their breeding range extends from Florida to Texas, north to British Colombia and eastward across Canada to Newfoundland. Although aggressively territorial during the breeding season, kingbirds are more tolerant of each other while on migration and during the winter months in South America (from Venezuela to northern Argentina), when they can be found in small flocks.

Male Eastern Kingbirds sing a complex dawn vocalization consisting of soft high-pitched, spitting notes followed by a buzzy, descending tzeeer, which is repeated many times. The call is a high-pitched, buzzing, and unmusical chirp. Although kingbirds are “passerines,” a taxonomic group commonly referred to as perching birds or songbirds, kingbirds and other flycatchers are not true songbirds. They are in a different subgroup (the suboscines), and their voices are much less complex.

As with many other bird species that specialize on a diet of aerial insects, Eastern Kingbird populations have been declining in recent decades, particularly in eastern North America. According to the Breeding Bird Survey, the Canadian population has fallen by just over 50% since 1970.