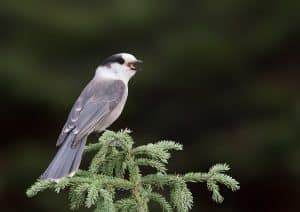 Birders associate Canada Jays with Canada’s vast boreal forest, where they remain year-round, relying on adaptations like purposeful hypothermia to survive frigid winter temperatures. They are known for their cheery whistled notes, effortless flight, and resourcefulness in seeking food (whether offered or not) from any people they encounter in the northern woods.

Canada Jays are widespread. Their range spans the boreal forest (and similar high-altitude coniferous forest) in every Canadian province and territory. Each bird breeds and overwinters on the same territory year-round. Although they are non-migratory, extremely rare southward autumn movements occur.

Canada Jays feed on berries, fungus, arthropods, carrion, and virtually anything else they can find. Rare food items illustrate their opportunism, such as winter ticks from the back of a live moose, and larval salamanders and toads captured in water.

Canada Jays survive without fresh food for long periods by storing food at all times of year in thousands of widely-scattered caches throughout their territories. To store items they stick saliva-coated mouthfuls behind bark and in crevices in tree trunks, and then use their impressive memories to retrieve the caches when needed, including in late-winter when they nest. Nests are hefty structures consisting of twigs and bark strips thickly insulated with animal hair, cocoons, lichen, and feathers, in which females successfully incubate three-egg clutches at temperatures as low as -30°C.

According to the Breeding Bird Survey, the Canada Jay population has been fairly stable in Canada since 1970. However, breeding bird atlas data and targeted population studies in Ontario’s Algonquin Provincial Park suggest that the species is declining along the southern edge of its range. This may be caused by spoiling of stored food caches during warm weather due to climate change. 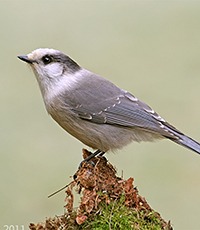