This stocky Buteo is easiest to spot during migration, when it forms spectacular “kettles” – swirling masses of soaring birds. This can be observed at fall hawk watches in eastern North America, where tens of thousands of individuals may pass over in a single day. Adult Broad-winged Hawks are reddish-brown above with cinnamon-barred underparts, a black-and-white striped tail, and pale underwing with a dark border – though, to the untrained eye, they appear as indistinct specks when flying hundreds of metres overhead. A rare dark colour morph also exists.

Broad-winged Hawks breed in deciduous and mixed forests across eastern North America, with their Canadian range extending westward into British Columbia. On their impressive migration, they travel to wintering grounds in southern Mexico, southern Florida, Central America, and South America. There are several subspecies that reside on Caribbean islands year-round.

In terms of diet, the Broad-winged Hawk is a generalist. Small mammals, amphibians, reptiles, birds, insects, and other invertebrates all find their place on the menu, according to what is available. Its hunting style is somewhat laid-back: it takes position at a vantage point and pounces on prey that passes by. Aerial courtship displays include circling, soaring back and forth, and tumbling toward the ground. Its call is a shrill, two-syllable whistle.

Data from the Breeding Bird Survey suggest that the Canadian breeding population has been slowly increasing since 1970. Better knowledge of population status and trends is needed for many raptor species, including the Broad-winged Hawk. Birds Canada is working with other monitoring and research organizations to fill these information gaps through the Raptor Population Index. The most significant threat to the Broad-winged Hawk is habitat loss and fragmentation. 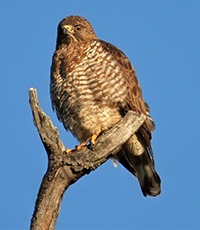