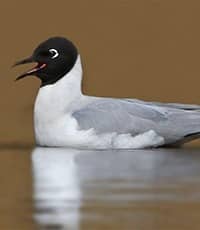 The Bonaparte’s Gull is graceful and delicate. Its vocalizations and flight are more tern-like – so much so that it was originally included in the genus Sterna (medium-sized terns). It is also smaller than most gulls (only the Little Gull is smaller). The Bonaparte’s Gull’s head is black in breeding plumage and white with a black spot behind the eye in winter. It has a thin black bill and pink to orange legs.

The Bonaparte’s Gull is the only gull to build a stick nest in a tree, usually a conifer. It also tends not to gorge on garbage or carrion, feeding on insects, fish, crustaceans, and molluscs instead.

Population trends are tough to monitor for Bonaparte’s Gulls, because they breed in the secluded boreal forest and disperse widely in winter. Fortunately, key concentration sites offer monitoring opportunities. One such site is the Niagara River Corridor Important Bird and Biodiversity Area (IBA), where IBA Caretakers and volunteers survey the gulls annually. Up to 25% of the Bonaparte’s Gull’s global population is estimated to pass through this IBA in fall and winter! Overall, Christmas Bird Count results indicate a reasonably stable population in Canada. 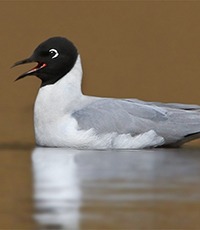