Bioblitzes Bring Canadians Together to Study and Enjoy Nature 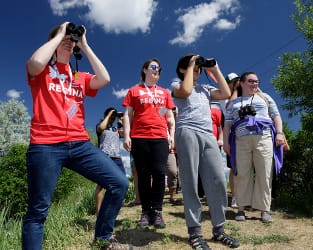 This year, BioBlitz Canada 150 events are being held across the country. They have been organized by the Canadian Wildlife Federation with BioBlitz Canada and many other conservation partners, and were made possible by the Government of Canada as a Canada 150 Signature Project.
If you’re not familiar with the term, a bioblitz is an inventory of the living things inhabiting a specified area, conducted in a 24-hour period. It’s typically undertaken by taxonomic experts and amateur naturalists, and sometimes includes non-expert community members as well. The goal of BioBlitz Canada 150 is to increase our knowledge of biodiversity in ecologically significant areas while engaging Canadians in enriching nature experiences.
Bird Studies Canada enthusiastically co-organized two fun and successful BioBlitz Canada 150 events that took place in June. Read the descriptions below to find out what species were observed and what it was like to be there.
You can also check the BioBlitz Canada 150 event calendar and map to look for events near you! There are still many bioblitzes happening over the next two months. We invite you to join Bird Studies Canada staff at two upcoming flagship events: at Vancouver’s Stanley Park, August 12-13, or at the Québec City bioblitz, September 1-2 at the Beauport Outdoor Centre.
BioBlitz Canada 150 Regina (Community Bioblitz)
This event took place at the Royal Saskatchewan Museum, Saskatchewan Science Centre, and Wascana Centre Habitat Conservation Area on June 9 and 10.
LeeAnn Latremouille, Bird Studies Canada’s Saskatchewan Breeding Bird Atlas Coordinator, was thrilled to lead bird walks as part of the event: “It was great to be out birdwatching with so many curious and engaged people! People were really eager to learn and I think they were surprised at the diversity of birds found in such a small area.”
“We were fortunate enough to detect a single singing Nelson’s Sparrow. One of the most exciting sightings for young families was a very cooperative Mallard hen with about 11 ducklings; the family was sunning and preening themselves on the opposite bank only 25 m away, so everyone got to have really good looks.” Check out the Regina results on iNaturalist to see what else was observed at this bioblitz.
LeeAnn hopes the experience of BioBlitz Canada 150 Regina will inspire people to continue exploring nature: “There were a few budding birders who were quite motivated to do more birdwatching after our walk, which made me really happy. Several people commented that they enjoyed the bioblitz so much that they would be returning to further explore areas they discovered through our event.”
Norfolk Forest IBA BioBlitz (Science-intense Bioblitz)
The following description was provided by Amanda Bichel (Ontario IBA Coordinator) and Jody Allair (National Manager of Conservation Outreach), both of Bird Studies Canada.
“The incredible diversity of the Norfolk Forest IBA drew 50 enthusiastic experts and volunteers from all over Ontario to contribute to the bioblitz from June 17-18. Extending 20 km east to west near the north shore of Lake Erie, this Important Bird and Biodiversity Area consists mainly of deciduous Carolinian forests, but also includes interesting grassland and sand plain habitats.”
“This event was the first of its kind, as a science-intense and IBA-focused bioblitz carried out by Bird Studies Canada. It proved to be a successful pilot model for IBA bioblitzes, which could potentially be used at IBAs across Canada, or even around the world. The event also showcased the importance of sharing and communicating science through social media and apps like iNaturalist.”
“Over 1400 species were recorded on the Norfolk Forest IBA iNaturalist Project. Experts identified over 120 bird species (pretty great for breeding season), 593 plant species, 388 moth species, and over 240 other insect species, as well as reptiles, amphibians, freshwater mussels, bats, and fish. Highlights included species at risk, such as the Acadian Flycatcher, Prothonotary Warbler, Fox Snake, and Hognose Snake; and rarities like Dickcissel and the Putty Root Orchid.”
Acknowledgements
Both BioBlitz Canada 150 Regina and the Norfolk Forest IBA BioBlitz were made possible by generous funding from the Government of Canada and support from the Canadian Wildlife Federation, who oversaw these projects.
We also acknowledge the other co-organizers of BioBlitz Canada 150 Regina: the Royal Saskatchewan Museum, Friends of the Royal Saskatchewan Museum, Wascana Centre, Friends of Wascana Marsh, Nature Saskatchewan, and Saskatchewan Science Centre. Community sponsors of the event included: the Entomological Society of Saskatchewan, Ducks Unlimited Canada, Nature Regina, SaskTel, Regina Public Library, Nature Conservancy of Canada, and Saskatchewan Prairie Conservation Action Plan.
Special thanks go to the Nature Conservancy of Canada and Long Point Basin Land Trust for their support on the ground and during the planning stages of the Norfolk Forest IBA BioBlitz.
And finally, we thank all participants of both events for the time they spent helping to uncover some of Canada’s biodiversity!