The Chimney Swift Chimney Restoration Fund (the Chimney Swift Fund) is a project undertaken by Birds Canada with the financial support of the Government of Canada through the federal department of Environment and Climate Change and with support and guidance from diverse partners from Saskatchewan to Nova Scotia. 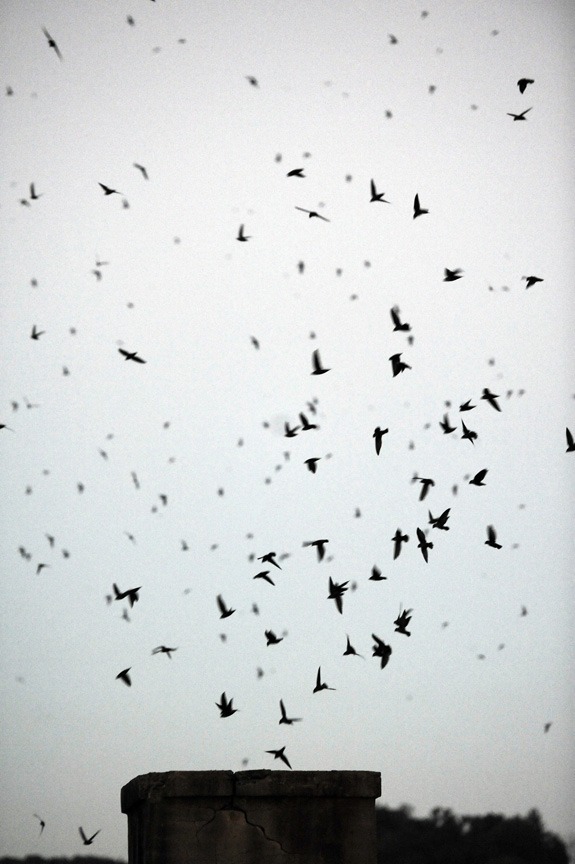 ​The Chimney Swift, a Species at Risk

Resembling a swallow, the Chimney Swift is a small dark gray-brown bird characterized by a cigar-shaped body, long, narrow, and tapered wings, and a short tail. The Chimney Swift is both an aerial insectivore and a long-distance migrant, two groups of North American birds that are in decline. It breeds in eastern North America and spends much of the rest of the year in northwestern South America.

Its breeding range in Canada is situated in the south-central and southeastern parts of the country, extending from eastern Saskatchewan to Nova Scotia. Most Chimney Swifts arrive in Canada between late April and mid-May, depending on the latitude of a given site. Most have left for their southbound migration by mid-October.

In the past, Chimney Swifts mainly nested and roosted in large-diameter hollow trees in old-growth forests. However, over the past 400 years there has been a drastic reduction in the numbers of suitable hollow, mature trees within the North American landscape, and the species has become largely dependent on anthropogenic structures, primarily chimneys, for nesting and roosting.

While a chimney used for nesting is occupied by only one pair, several dozen to more than 1,000 individuals may roost in a single chimney at night or in cold or rainy weather during the day. Roosts are mostly used by migrating birds but can be used by non-breeding individuals throughout the summer period.

The Canadian population of Chimney Swifts has declined by nearly 90% since 1970, likely due to reduced insect prey availability and the loss of nesting and roosting sites. The Chimney Swift has been listed as Threatened under the federal Species at Risk Act since 2009 and is also protected under province-specific laws and regulations in the provinces where it breeds. The breeding population size in Canada is currently estimated to be between 20,000 and 70,000 individuals.

As Chimney Swifts show high fidelity to their nesting and roosting sites, a threat to their survival is the loss of suitable chimneys. Capping, lining, and screening of chimneys renders the chimneys unusable to Chimney Swifts, and the demolition of degraded chimneys removes the habitat entirely for this species. The Chimney Swift Fund will help partners and chimney owners undertake work to repair damaged chimneys and thus maintain the structures as usable Chimney Swift habitat. This will help reduce the impact of habitat loss on this species at risk.

Chimney owners who are located in Manitoba should first contact the Manitoba Chimney Swift Initiative who has a specific way of funding chimney restoration projects in this province.

Any repair work to an anthropogenic structure, such as a chimney, used by nesting or roosting Chimney Swifts anywhere within the Canadian range may be eligible for financial support. Funds from the Chimney Swift Fund may cover up to a maximum of 50% of the total cost of the restoration project. An applicant will be required to match funds on a 1:1 basis.

Repair work on the structure must be done in such a way as not to alter the characteristics that make it suitable for the Chimney Swift. The repair of a chimney should meet the following criteria:

Priority will be given to projects deemed to have the greatest impact for Chimney Swift conservation provincially and nationally, and so funds will be allocated to the repair of high-priority structures first (see Selection process below). Though this may mean that a project may not receive funding in a given year, it does not mean that it will not be eligible for support in a subsequent year.

All costs associated with the repair are eligible for 1:1 matched support and these include, but are not limited to chimney assessment, materials, and labour costs.

The repair work must begin after the Chimney Swifts have left for their southbound migration (they usually leave between early September and mid-October, depending on the location) and must be completed by March 31.

We are no longer accepting applications in 2022. Please visit this page again in early 2023 to find out about the application deadline for the next round of funding.

Need for a provincial permit

In Nova Scotia, a permit is required by the province even when the project is conducted outside of the period when Chimney Swifts are present. Please contact the Biodiversity Program of the Department of Natural Resources and Renewables (Biodiversity@novascotia.ca) to get the necessary application form.

In Ontario, information about the restoration project needs to be submitted to the Ministry of the Environment, Conservation and Parks (SAROntario@ontario.ca) to determine whether a permit would be required or not.

Applications will be evaluated by the Chimney Swift Fund Committee, which is comprised of members from different regions across the Canadian geographic range of the species. The members of the Committee will give precedence to projects that target the restoration of structures that (1) have been identified as critical habitat in the Recovery Strategy for the Chimney Swift (Chaetura pelagica) in Canada or (2) that have been monitored through a regional/provincial initiative.

Successful applicants will be required to sign an Agreement with Birds Canada before the first payment can be made. This document includes an agreement that the repair work will be carried out and that it will preserve the characteristics that make the structure suitable for the use of the Chimney Swift.

Half of the awarded amount will be sent at the start of the repair work and the other half, on completion of the work.

Sharing your home with Chimney Swifts: All you need to know to help this Species at Risk – Birds Canada

Recovery Strategy for the Chimney Swift (Chaetura pelagica) in Canada

For more information or to let us know that Chimney Swifts are using your chimney, please contact us at chimneyswiftfund @ birdscanada.org.