A Unique Study Needs Your Help! 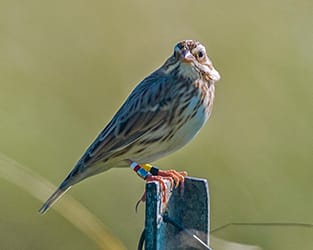 The Ipswich Sparrow (Passerculus sandwichensis princeps) is a subspecies of Savannah Sparrow that breeds almost exclusively on Sable Island, Nova Scotia. In the fall, Ipswich Sparrows migrate to the NS mainland, then to their wintering grounds in the eastern U.S. They winter anywhere from Massachusetts to Georgia, but are found in the highest densities in New Jersey and Virginia. In the spring, they return to Sable Island.
To better understand these birds, researchers at Acadia and Dalhousie universities have begun a long-term demographic study. 263 sparrows have been banded on Sable Island with unique combinations of coloured bands, which allow individual birds to be identified. From the proportion of birds that are seen again (or “resighted”), we can estimate how many survive at each stage of their migration. The results of this study will help us better understand the structure of the Ipswich Sparrow population.
A big challenge is finding the colour-banded birds after they have dispersed from Sable Island. With so many beaches occupied by Ipswich Sparrows, we need help looking for them! Look for Ipswich Sparrows in Nova Scotia in fall (September to November) and spring (April-May), and on the eastern U.S. coastline in winter (November to April). These birds can be found anywhere along the coast, but mainly occupy sandy beach dune habitat.
If you see a banded Ipswich Sparrow, please report it! Our sparrows have one red/white bi-coloured band over an aluminum band on the right leg, and three coloured bands (red, white, black, blue, yellow, or green) on the left leg. Tell us where you saw the bird, its band colours (from top to bottom on each leg), and the date. Please include photos if possible! If you find a sparrow but could not see all of its bands, please report that as well.
Reports can be submitted via email (ipswichsparrows@gmail.com), eBird (include colour band combinations in checklist comments), or Facebook. Project updates and more information can be found on the Ipswich Sparrow Project Facebook page and website.