A New Report on the State of Canada’s Birds 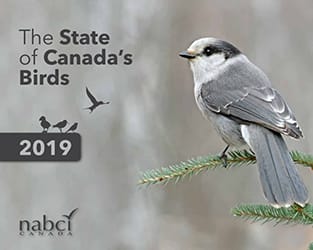 The North American Bird Conservation Initiative (NABCI) has just released a new report on the state of Canada’s birds. It’s the second comprehensive assessment of the conservation status of birdlife in Canada. The new report highlights the challenges of bird conservation as well as past and current successes of conservation actions. It also draws attention to actions that all Canadians can take to help conserve bird populations.
Bird Studies Canada is proud to have partnered with the other members of NABCI to develop this important report. Bird Studies Canada’s volunteers, like you, were an important part of this achievement; sixty-six percent of the species trends in this document came from programs that rely on skilled Citizen Science volunteers.

How are our birds faring?
Canadian breeding bird populations have changed since 1970, when effective monitoring began for most species. Some groups, such as grassland birds, aerial insectivores, and shorebirds, are showing major declines. In contrast, waterfowl and birds of prey have largely recovered from earlier declines as a result of careful harvest management, wetland restoration, and a ban on DDT use.
These population rebounds are evident in some areas where Bird Studies Canada staff and volunteers are working. For instance, Bald Eagles and are very abundant during the winter months in British Columbia’s Fraser Delta region. Farther east, on Lake Erie, Christmas Bird Count data indicate that numbers of Scaup, Goldeneye, and Bufflehead have increased over time.
We at Bird Studies Canada are encouraged by these positive results, which demonstrate how conservation actions can bear fruit. At the same time, we are concerned by the findings showing major declines for other groups of birds. We are committed to working with partners and with all Canadians to reverse these trends. 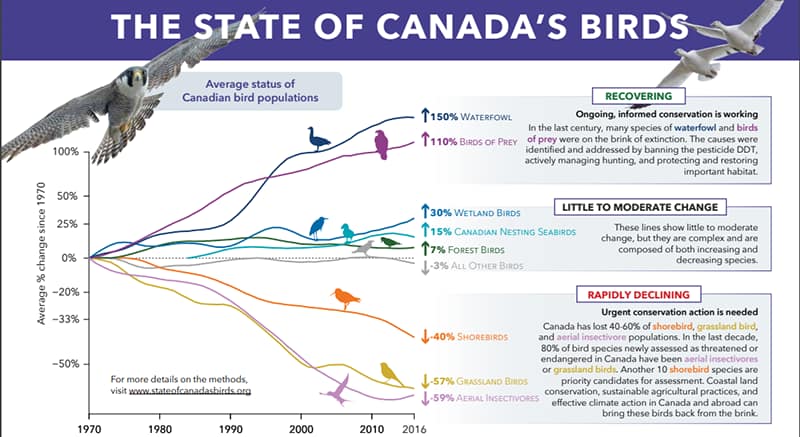 We’re taking action, with your help
Bird Studies Canada works on a variety of research, monitoring, and stewardship projects, and collaborates with governments and non-government agencies to create conservation strategies.
The conservation of grassland birds and aerial insectivores depends heavily on stewardship from private landowners. Bird Studies Canada has had the privilege to work with landowners across the country whose dedicated efforts are preserving bird habitat. For example, farmers around Prince George, BC have been supporting the successful nesting of Long-billed Curlews each year through their stewardship of hay fields. We are also partnering with cattle ranchers in Manitoba to preserve grassland habitat for Species at Risk like Sprague’s Pipit and Chestnut-collared Longspur. In Ontario and Eastern Canada, Bird Studies Canada is encouraging and supporting the stewardship efforts of people hosting Chimney Swifts and swallows on their property.
We are also taking action for shorebirds. Bird Studies Canada is taking part in a collaborative initiative to protect British Columbia’s Fraser Delta – a key stopover site – from industrial development. In Ontario and the Maritimes, we are working with dedicated volunteers and partners to protect nesting Piping Plovers. And in the Bay of Fundy, we are leading coastal stewardship efforts to reduce disturbance to thousands of shorebirds at critical stopover areas during fall migration.

If you want to do more
Bird Studies Canada is deeply grateful to you, our volunteers and supporters, for all that you do to conserve Canada’s birds.
With our NABCI partners, we encourage all Canadians to take action to improve the state of Canada’s birds and our environment. If you are looking for new ways to be a champion for birds or actions you can encourage others to take, consult the new report and Bird Studies Canada’s Top Six Ways You Can Help Birds. Suggestions include:
• supporting forward-thinking policies at the political level;
• “voting with your fork” by reducing food waste and choosing sustainably-produced products such as bird-friendly coffee, range-fed beef, and certified seafood;
• adding products on exterior glass surfaces, like windows, to make them visible to birds and prevent collisions;
• and more.
Bird Studies Canada eagerly welcomes Citizen Scientists of all skill levels to participate in programs across the country. Visit birdscanada.org to learn more.