The Queen Charlotte Strait is a narrow body of water separating northern Vancouver Island from the mainland of British Columbia. It is bounded by Johnstone Strait to the southeast and the open waters of Queen Charlotte Sound to the northwest. The area is well-known to support large numbers of several different whale species. Nearby islands are also known to provide nesting habitat for tens to hundreds of thousands of storm-petrels and Rhinoceros Auklets each summer.

While people have long been aware of this abundant marine life, until recently, there were no published bird surveys in the strait. That means we don’t have documentation of the numbers and species of birds using strait in a given year (baseline data) that we could compare to in future years to see how the way birds are using the strait is changing over time in response to climate change, conservation initiatives, or other factors. Dr. Tony Gaston, in collaboration with Mark Maftei and the Raincoast Education Society (RES), set out to improve this knowledge by conducting self-funded, formal surveys in 2020 and 2021. And we had an opportunity to participate in the field surveys! 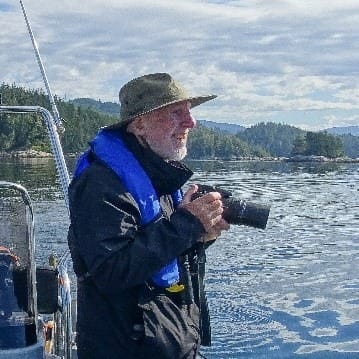 Tony Gaston is a retired research scientist with Environment and Climate Change Canada. He is also currently a naturalist, writer, and Chair of the Scientific Advisory Committee for the Laskeek Bay Conservation Society. He has published hundreds of scientific papers and articles, written five books, and co-edited the newly released, acclaimed Birds of Nunavut. Tony received Doris Huestis Spears Award for outstanding contributions to Canadian ornithology and the Jamie Smith Mentoring Award from the Society of Canadian Ornithologists.

RES aims to shape an environmentally sustainable future for the Clayoquot and Barkley Sound through education and community stewardship. RES delivers a broad range of high-quality programs such as field school, speaker series, summer camps, school programs, and events focused on the natural environment, cultures, and local communities.

The main goals of the Queen Charlotte Strait surveys were: to document the “peak timing” of migration for each species passing through, or arriving to winter in, the strait (i.e., the time at which the greatest number of each bird species was present in the strait during its migration), and to estimate how many individual birds of each species were present at these times.

Knowing how many birds use a certain area at once is valuable because, if a given species is highly abundant, this could qualify the area to be designated as an “Important Bird or Biodiversity Area” or a “Key Biodiversity Area”. These designations can then serve as stepping stones towards lasting conservation of the area.

We expect birds to be present in the strait in the highest numbers and in the greatest variety during fall migration. One reason for this is that in fall, the strait’s sheltered waters offer plenty of food to attract birds. Also, both young birds born that year and adult birds are migrating, as opposed to spring migration, which happens before “young of the year” have hatched. And finally, the geography of the strait is shaped in a way that “intercepts” southward-migrating birds in the fall.

To document bird abundance and diversity, Tony designed a protocol to survey the same sets of “transects” (straight lines that researchers travel along while counting birds) four times each year from late August into mid-October, with surveys spaced two weeks apart. The surveys captured the occurrence of several groups of birds that rely on marine habitats, including waterfowl (ducks and geese), loons, grebes, gulls, alcids (murres, auklets, murrelets), tube-noses (shearwaters, storm-petrels), and shorebirds. During the surveys, researchers also recorded marine mammals, including whales, porpoises, sea lions, seals, and otters. These boat-based surveys are more effective at detecting offshore species like shearwaters, storm-petrels, murres, and auklets than are existing surveys that are conducted from the coast, like the Coastal Waterbird Survey.

Bird count data from the surveys can be used to estimate the total number of birds of each species in the entire Queen Charlotte Strait. In the first year of surveys, estimates of Pigeon Guillemots were about 2500 individuals in the entire strait, close to 4% of the entire North American population. An estimate of over 40,000 Common Murre, 3000-4000 Short-billed Gull, and 8000-13,000 California Gull were some of the other amazing estimates from 2020. In 2021, Common Murre estimates for the entire strait were again over 10,000 and an estimated 3000 Rhinoceros Auklet were in the whole study area.

Graham’s Notes from the field:

From our very first survey transect, I was so excited to be on the water! But, one particular 20-minute transect stood out as the highlight of my time surveying. Our transect ran along the west edge of the Broughton Archipelago Marine Provincial Park where the open inner strait meets the many small islands and the strong tides help push nutrients all through the water. Within our transect, we saw a Minke Whale, a Steller Sea Lion, at least five Humpback Whales, hundreds of Red-necked Phalaropes feeding on the surface, four alcid species (over 100 Rhinoceros Auklet, Common Murre, Marbled Murrelet, and Pigeon Guillemot), and several other bird species.

You can see an eBird Trip Report for this survey round here: https://ebird.org/canada/tripreport/5840

Perhaps the most interesting observation made during the surveys was the increased presence of Short-tailed Shearwaters in 2021 (estimates ranged from 2000 to 14000 individuals in the strait) compared to their near-absence in 2020. Starting mid-summer in 2021, birders along the east side of Vancouver Island began to report large numbers of Short-tailed Shearwaters – from boats, and even from land. This continued into the early fall, with reports of Short-taileds coming from all over BC waters and other parts of the Pacific. This species is known to breed on islands close to Australia’s south and east coasts. When not breeding, they wander widely throughout the Pacific Ocean, usually spending the northern hemisphere summer in the Bering Sea. Historically, small numbers would transit along the west coast of North America, but the scale of the 2021 occurrence is unprecedented.

Yousif’s Notes from the field:

Upon completing a transect in the remote northern shoreline of the study area, we noticed a large flock of shorebirds land on a rock near Screen Island. We moved in closer to find a large mixed flock of Surfbirds and Black Turnstones voraciously feeding on barnacles and other tidal invertebrates. The most interesting thing was that the birds seemed completely unconcerned about our presence. Our guess was that this was due to a combination of things. First, they seemed extremely hungry, possibly having arrived from a long flight from further up the coast, so might have been too hungry to care about us. And second, many if not most of the individuals had never before seen humans and motorized vehicles, given that their breeding grounds are so remote on the Arctic tundra, so may not have had experiences of humans posing any danger. Floating in the boat within arm’s reach of these birds totally undisturbed was an experience I won’t soon forget.

You can see an eBird Trip Report for this survey round here: https://ebird.org/canada/tripreport/5107

It was fortunate that the invasion of Short-tailed Shearwater in 2021 was captured on the surveys – it easily could have been missed! This reminds us that the naturalists who submit data to Citizen Science projects like eBird on a regular basis are playing an important role by documenting changes in bird distributions over time. These data can provide information on broad-scale patterns that are used to help us all understand the impacts of climate change and conservation initiatives. It will be interesting to see how many Short-tailed Shearwater pass through the strait and along the west coast in the coming years – hopefully we will be able to learn more about what is so far an inexplicable event!

You can read more about the results of the first year of surveys, in 2020, here and look forward to Tony’s analysis in the coming years. 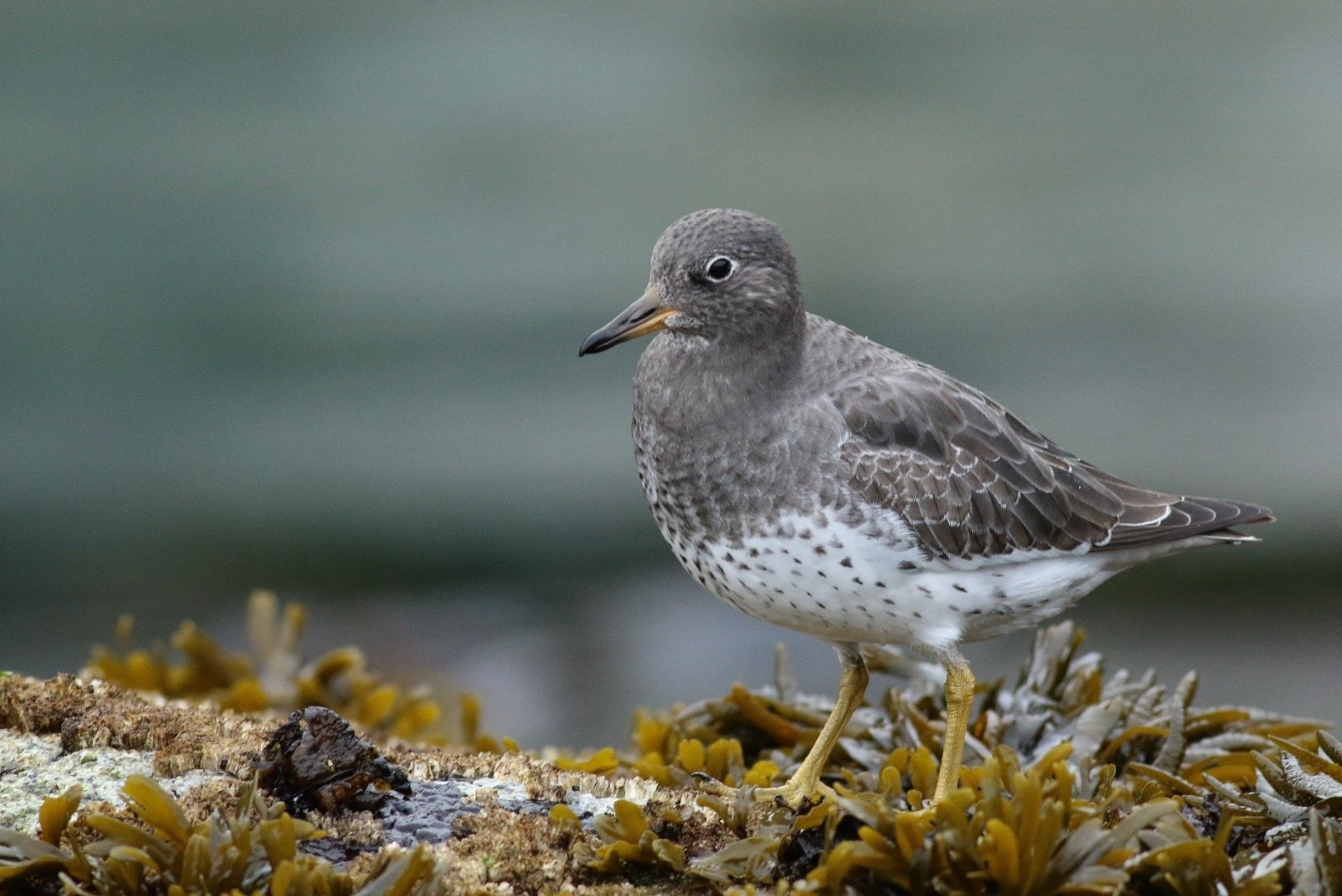