Space to Roost Project Makes a Difference for Shorebirds in NS 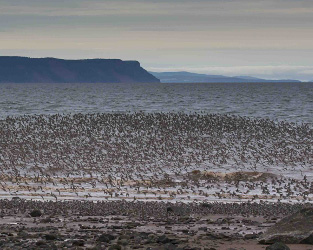 The aim of the Space to Roost Project is to reduce human disturbance to shorebirds at high-tide roost sites in Nova Scotia’s Minas Basin. Human disturbance causes shorebirds to “flush” (fly off in search of a safe roost site) and deplete the energy reserves they need to complete their transatlantic, non-stop flight to South America. Bird Studies Canada and partners (Dalhousie University, Environment and Climate Change Canada, NS Natural Resources, Blomidon Naturalists Society, and Nature Conservancy of Canada) have been collaborating with recreational beach users to address the problem. Since this initiative began in 2015, positive outcomes for shorebirds have already been measured.
In 2017, local recreational users and partners helped us designate one section of the coastal area at ‘The Guzzle’ (the channel between Boot Island and the mainland) and at Avonport Beach as Shorebird Resting Beaches. We placed signs at each end of the beach asking people to avoid use during shorebird resting periods (from two hours before high tide to two hours after) throughout peak migration in August. We also distributed handouts on site and at local businesses to raise awareness about the shorebirds and what people could do to help them.
Compared to what we observed in 2016, in 2017:
• Fewer shorebirds were disturbed by people at both Shorebird Resting Beaches;
• 100% of anglers respected the Shorebird Resting Beaches;
• The proportion of people interviewed who knew the importance of the area to shorebirds increased from 47% to 78%;
• The proportion of beachgoers staying on the dyke above the Guzzle Shorebird Resting Beach increased.
August 2018 will be our third and final year of research, and we will again be asking people to avoid Shorebird Resting Beaches at The Guzzle and Avonport Beach in the Minas Basin around high tide. We are also adding a ‘control’ – Debert Beach in Cobequid Bay – to compare against our Shorebird Resting Beaches.
Last year, our focus was on striped bass anglers. However, we found that bird photographers were a problem in both 2016 and 2017, causing some of the few disturbances on The Guzzle Shorebird Resting Beach. We are now in the process of reaching out to local birding and bird photography groups to encourage their membership to stay back from the birds so as not to flush them. We are encouraging all birders and photographers to use telephoto lenses and binoculars, and to follow Audubon’s guiding principle of ethical bird photography: “Place the welfare and safety of the birds and their habitats above all else and avoid disturbing them in any way.”
If posting photos online, we encourage the use of Audubon’s #ShareTheShore hashtag, as well as a funny hashtag we found on Instagram: #FlushingIsForToilets. It’s our hope that these hashtags will encourage birders and photographers to follow Audubon’s ethical photography guidelines and hold each other to account. We’re also in talks with the creators of #EthicalOwl on Instagram, in the hopes of creating a sister hashtag called #EthicalShorebird.
We welcome questions, ideas, and volunteers to help at roost sites in August. Please get in touch and stay connected by visiting the Space to Roost Facebook page or by contacting Jaya Fahey (SpaceToRoost@birdscanada.org) or Sue Abbott (sabbott@birdscanada.org). If you’re in the area, we invite you to come meet us in person on July 30 at the 30th Anniversary Celebration for the Minas Basin Western Hemisphere Shorebird Reserve Network site (details coming soon via the Space to Roost Facebook page). 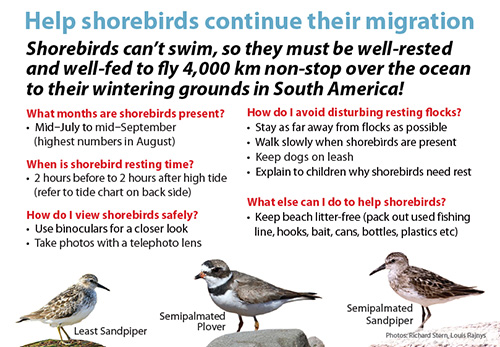 Space to Roost will be printing updated ‘How to help shorebirds’ handouts and distributing them to Minas Basin businesses and tourist sites in July 2018.