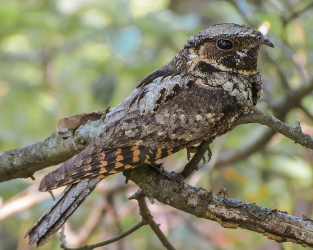 Each year, the global extinction risk to all bird species is assessed by BirdLife International, the official Red List Authority for birds for The IUCN Red List of Threatened Species™. Anyone with information on a species status can contribute through BirdLife’s globally threatened bird forums. The 2018 update has just been released. Several Bird Studies Canada staff participated, spearheaded by Senior Director of Landscape Science and Conservation, Andrew Couturier. Breeding Bird Atlases were particularly instrumental in informing our knowledge of changes to species’ distribution and abundance (see an example in the map below). Other localized datasets and the invaluable knowledge of staff experts also played important roles.
Positive news for Canadians concerns the Henslow’s Sparrow and Red-headed Woodpecker, both of which have been “downlisted” from globally Near Threatened to Least Concern. These changes come as pleasant surprises, because both species are considered Endangered at the northern limits of their ranges here in Canada. The reason for their improving global status is that population declines have stabilized in their core ranges in eastern and central regions of the United States as a direct result of habitat management (forest thinning for the woodpecker, and environmental subsidies paid to farmers for the sparrow). This is encouraging because it suggests that IF Canada were to boldly enact similar measures at a significant scale, these two formerly quite common species might stabilize, and even rebound.
It is important to note that it is not unusual to see differences between the Canadian Species at Risk Act (SARA) listing, which assesses species’ status solely within Canada, and the Birdlife/IUCN assessment, which is global. Discrepancies are especially noticeable in cases where Canada constitutes only a small portion of a species’ global range. A good example is the Burrowing Owl, listed as Endangered in Canada because northern migratory populations are experiencing devastating declines; whereas south of our border, all the way to southern South America, resident populations are stable or increasing, hence Burrowing Owl is considered Least Concern globally.
A common mantra in environmental policy and management is “keeping common species common.” This is challenging because conservation priorities and scarce resources are often focused on the rarest or most steeply declining species and habitats. The 2018 assessment indicates three species of cultural significance are now on the lower rungs of the extinction ladder. Ongoing, long-term declines in the Eastern Whip-poor-will and Rufous Hummingbird have prompted their “uplisting” to Near Threatened. Perhaps the biggest shocker is the listing of Common Grackle as Near Threatened, after Partners in Flight estimated the population of this backyard bird had plummeted by over half since 1970. 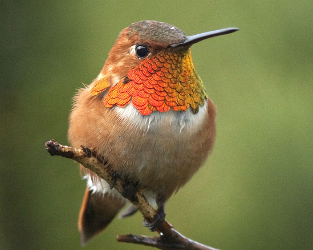 The decline of the Rufous Hummingbird, which makes the longest migration of any bird species in the world relative to its body weight, is not well understood. Various factors may be affecting its complex loop migration: from Mexico’s pine-oak woods through lowland and Pacific coastal habitats, to high elevations post-breeding, then south again along interior mountain ridges. Check out the fascinating British Columbia Breeding Bird Atlas account, by Alison Moran and Dave Fraser, to learn more about this amazing bird’s life cycle. Replenishing gardens and asking municipalities to replant their lands with native food plants like Red-flowering Currant (Ribes sanguineum), Salmonberry (Rubus spectabilis), and wild columbine (Aquilegia species) is one way to help.
The Eastern Whip-poor-will is an intrinsic part of local culture across its range. Long-term monitoring by Citizen Scientists has revealed a population loss of over 60% since 1970. Its cryptic habits and longish migration (birds that breed in Canada winter in Central America) make diagnosis of declines difficult. Dependent on flying insects throughout the year, it is particularly sensitive to pesticides, intensified agriculture, silviculture, and other factors that are reducing insect biomass. Eastern Whip-poor-will is also a victim of habitat loss. Programs like Bird Studies Canada’s Southern Ontario Forest Birds at Risk program are helping, by engaging woodlot owners to adopt best practices (like harvesting outside the breeding season) to benefit this and other species, and working with partners to increase protection and maintain large forest blocks across the Carolinian landscape. 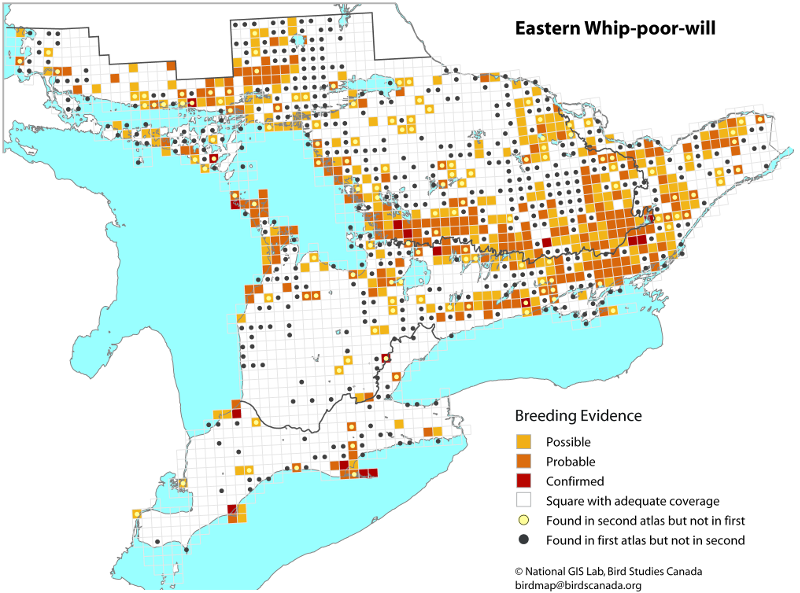 Breeding distribution map of Eastern Whip-poor-will from the Ontario Breeding Bird Atlas, 2001-2005. Grey dots indicate the disappearance of this species from atlas squares since the 1981-1985 atlas. This map was one of the first to signal a problem with aerial insectivores, and helped to inform Canadian and global listing processes.

The Common Grackle likely benefitted from land clearing that European settlement brought to North America. However, its use of agricultural land has led to it being considered a “pest,” prompting intensive control measures in some areas, which have apparently led to significant declines in recent decades.
Themes from other parts of the world include the good news that two more species have been brought back from the brink of extinction, including the Pink Pigeon on the Indian Ocean island of Mauritius, where intensive invasive species control and habitat management have led to another conservation success. However, there are more examples of species slipping ever closer toward extinction. Seven of Southeast Asia’s iconic hornbills have been uplisted, mainly due to deforestation, and drivers like the global market for palm oil (to make a difference, avoid products containing palm oil). The illegal trade in wild birds, especially in Indonesia, is driving more species to the brink of extinction.
The 2018 Red List contains more bad news for the world, and Canada’s birds (Rufous Hummingbird, Eastern Whip-poor-will, and Common Grackle), than good news stories (Red-headed Woodpecker and Henslow’s Sparrow). However, importantly, it demonstrates that the work of Bird Studies Canada, our supporters, and other NGOs is vital to both flagging problems as they arise, and to catalyzing action to combat the biodiversity crisis.