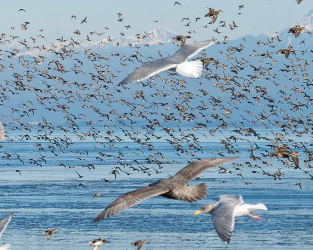 The Bald Eagle is not only a symbol of North America – it is symbolic of successful conservation. Since persecution was halted, and then DDT and other toxic agricultural pesticides were banned in the 1960s, Bald Eagle populations have swiftly recovered right across the continent. Today, Canada’s west coast supports the world’s largest concentration of Bald Eagles.
Naturally, the recovery of predators affects their prey. On the Pacific coast, Bald Eagles are now consuming more birds, including waterfowl, gulls, and seabirds. In some areas they are even eating more refuse, perhaps in response to declines in salmon and other fish prey.
Bird Studies Canada teamed up with the Pacific Wildlife Foundation and the SeaDoc Society to investigate what effects the top predator might be having on birds lower down the pecking order. Our findings were published in 2017 in the Northwestern Naturalist.
First, we explored a decade and a half of data collected by hundreds of Citizen Scientists through Bird Studies Canada’s British Columbia Coastal Waterbird Survey. The data showed that many species of waterbirds used inshore waters in large numbers in early fall when eagles were busy feeding along salmon rivers. The increase in eagles through fall and winter coincided with movements and lower numbers of coastal and marine birds.
We conducted field observations of these bird groups throughout the fall, winter, and spring. Our findings showed that diving birds, like sea ducks, moved away from inshore waters when eagles returned in late fall and winter. Dabbling ducks and gulls formed larger flocks in inshore waters, and dabbling ducks spent proportionally more time being vigilant. We also observed that flock sizes and avoidance flight distances of both dabbling and diving ducks increased with proximity to eagles.
A key message from these results is that most bird groups responded to the mere presence of eagles by altering their behaviour in order to reduce the predation risk. Different bird groups showed a range of adaptations in the face of eagle danger, including moving to areas farther from the eagles. With declines apparent for coastal and marine birds in the Salish Sea, especially diving birds, this work underscores the importance of understanding the indirect effects of predators on prey before deciding on any management actions to recover species. For example, a massive reduction in the number of Western Grebes wintering in the Salish Sea has coincided with an increase in Western Grebes wintering along the Californian coast. This apparent redistribution could be a response to prey availability, but as our work shows, eagle danger could also be an important factor.
As waterbirds congregate again following this breeding season, keep an eye out for their responses to nearby eagles. You could be witnessing natural ecosystem change before your very eyes.