By Andrea Gress, Ontario Piping Plover Conservation Program Coordinator, Bird Studies Canada
The 2019 season was not without its challenges for Piping Plover conservation in Ontario. High waters were an issue across the Great Lakes, leading to smaller nesting territories, and less beach overall for plover families and beachgoers to share. But despite the high water levels, the Great Lakes breeding population has increased from 67 pairs in 2018 to 71 pairs in 2019!
In Ontario we had 5 nesting sites with 8 pairs, which produced a total of 7 fledglings.
• Wasaga Beach had a very successful season, fledging 5 chicks!
• Sauble Beach produced 2 fledglings from 2 hatched nests.
• The first nest at Darlington Park washed out in a storm. The pair renested, but the chicks were unsuccessful.
• A pair nested on private property this year. The property owners were very supportive, and insisted upon protecting the nest! All 4 chicks hatched, bringing much entertainment and delight to the neighbourhood.
• Finally, a nest on a provincially protected island was found in June with 4 eggs. Follow-up surveys were cancelled due to stormy weather. Success of the nest is unknown. 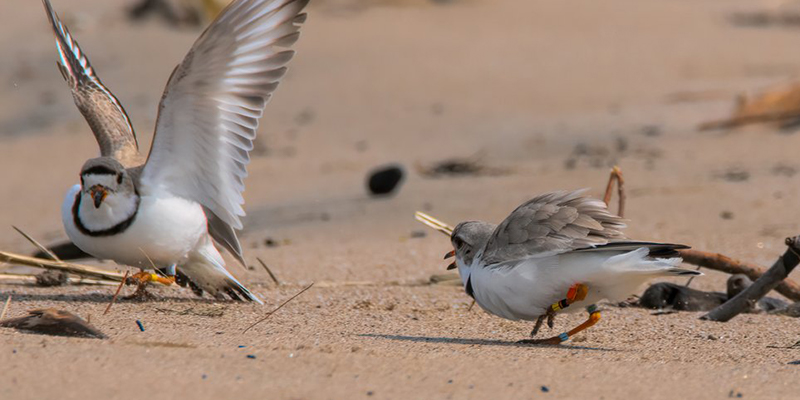 To celebrate the season, here’s a look at some of the volunteer programs and the VIP’s (Very Important Plovers) that populate Ontario’s beaches through the summer.
Most Successful Breeder award goes to…. “Worsley” of Wasaga Beach!
A bird known by the plover conservation community as “Worsley” hatched from the captive rearing center in Michigan in 2012. Since then, he has bred at Wasaga Beach 5 different years, producing an impressive 14 fledglings. This year was no exception – he successfully raised 3 chicks!
Sauble plover, “Mr. Blue Bands,” takes after his dad
From 2014-16, Sauble Beach volunteers had a favorite plover, which they nicknamed “Flagboy.” Flagboy mated with the same partner 3 years in a row, and was known for being an impressively attentive dad. He fledged 5 chicks over that time period. For the last 3 years, his son, “Mr. Blue Bands,” has been breeding at Sauble. Like his father, he has shown loyalty to his partner, and is proving to be an even tougher dad, fledging 8 chicks since 2017.
Toronto Island chicks return to home province
Toronto Island had its first successful nest in 2018, producing 3 fledglings. One female was observed this spring at Presqu’ile Provincial Park. Her brother was also observed this year, first at Point Pelee, then at Cobourg (where he was oddly spotted eating earthworms!), and finally at Darlington Park. Perhaps he’s scouted out a good nesting site for next year!
Superstar volunteers
• Volunteers are at the core of Piping Plover conservation across Ontario. 2019 marked the 4th year in a row of plovers nesting at Darlington Provincial Park, and the most successful year of the volunteer program! Even after the nest was flooded in a storm, volunteers continued outreach to ensure the plovers were given the space they needed to re-nest.
• Owners of the private nest site and their neighbours jumped at the opportunity to help an Endangered species. They told beachgoers about the nest, shared plover-themed temporary tattoos and stickers, and provided regular updates to us at Bird Studies Canada so that we could track the nest’s progress. Their support absolutely contributed to the nest hatching successfully!
• Sauble Beach and Wasaga Beach volunteers are among the most dedicated! Many volunteers at these beaches have been supporting the plovers since the birds arrived in 2007 and 2008. They celebrate the birds with events like Ploverpalooza, by setting up outreach booths on the beaches, and by working with schools to ensure kids grow up with an appreciation of local species. The plovers couldn’t thrive without the support of these individuals!
Finally, special thanks to our 2019 funders, the Ontario Trillium Foundation, Earth Rangers, and Federal and Provincial Governments. Without their support programs like this could not thrive.