This post was written with contributions from Dr. Marcel Gahbauer, Co-chair of COSEWIC’s Birds subcommittee. 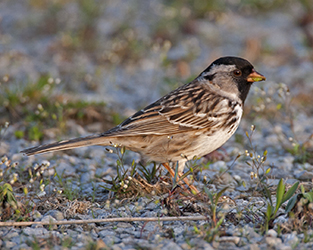 The Committee on the Status of Endangered Wildlife in Canada (COSEWIC) recently held its spring meeting in Whitehorse, YT. Two bird species – the Harris’s Sparrow and the Lark Bunting – were assessed for the first time. The committee also reviewed the status of the Burrowing Owl and the Rusty Blackbird.
The Harris’s Sparrow is the only songbird that breeds exclusively in Canada. It nests primarily in the boreal-tundra transition of Northwest Territories, Nunavut, and the northernmost parts of Saskatchewan, Manitoba, and Ontario. The species is primarily monitored on its wintering grounds in the U.S. midwest, where numbers have declined by nearly 60% since 1980. The Harris’s Sparrow was assigned the status of Special Concern on the basis of this trend, and concerns of ongoing threats such as habitat conversion, cat predation, and climate change.
The Lark Bunting occurs in Canada only where the northernmost edge of its range crosses into Alberta and Saskatchewan. Populations of this nomadic grassland songbird fluctuate greatly from year to year depending on seasonal weather patterns and grasshopper abundance. While this complicates trend estimation, data nonetheless show a reduction of 98% since 1970, and more than 50% in the past decade. Although it remains quite numerous, COSEWIC assessed Lark Bunting as Threatened in recognition of the population’s ongoing steep decline.
The Burrowing Owl was first assessed by COSEWIC in 1979 as Threatened, and has had its status reviewed four times since then, with an uplisting to Endangered in 1995. At this meeting, it was reconfirmed as Endangered, on the basis of further population declines of more than 60% over the past decade, and ongoing threats that suggest this rate of decrease may persist.
The Rusty Blackbird was assessed by COSEWIC as Special Concern in 2006 on the basis of substantial long-term population declines. Although numbers have largely stabilized over the past decade, COSEWIC voted to retain the status of Special Concern, as there has been no recovery of the population, and key threats such as wetland conversion and a blackbird control program on the U.S. wintering grounds are ongoing, as are concerns about wetland acidification, mercury contamination, and climate change in the Canadian breeding range.
In addition to birds, the committee assessed the status of many other plant and wildlife species. The results underscored a dire situation for many wildlife species in Canada’s north, including the Atlantic Walrus, of which one population is now Extinct, and the Eastern Migratory Caribou population, which was assigned Endangered status. A total of 62 wildlife species from Canada’s north are now considered to be at risk.
Visit the COSEWIC website to learn more about the recent status assessments of Canada’s wildlife.