Season Two of Saskatchewan’s Breeding Bird Atlas is on Now 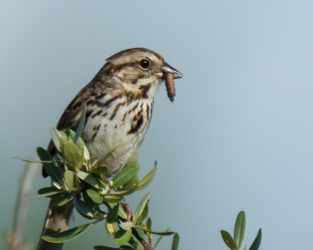 The second field season of the Saskatchewan Breeding Bird Atlas is well underway! Our dedicated volunteers and intrepid field crews have been scouring the province in search of birds both great and small. One of the most exciting observations so far this season has been the atlas’s first confirmed breeding record of White-faced Ibis – a species that appears to be expanding its range into the province.
Atlassers may have noticed that birds are a little quieter this time of year, but don’t put your binoculars away just yet! July is a great month to get observations to confirm breeding, with young of the year being a common sight. Right now, birds are busily feeding and tending to their young, from Mallards with ducklings on a wetland to Song Sparrows gathering food to feed hungry little mouths. Be sure to keep your eyes peeled.
Since this atlas project began, 314 atlassers have contributed over 4100 hours of their time. They have submitted more than 5900 checklists and 2570 point-count surveys from over 1140 different atlas squares, and the total number of records now exceeds 77,500! Thanks to volunteer efforts, breeding attempts have now been documented for an impressive 256 bird species in Saskatchewan. Explore our maps page (by selecting species in the drop-down menu) to see what’s been accomplished so far.
We will be sharing more Saskatchewan Atlas highlights and results summaries with contributing volunteers soon. Keep an eye out for our atlas newsletters coming later this summer and in the fall.
If you are not yet contributing to the Saskatchewan Breeding Bird Atlas, but would like to be, you can sign up now. Registration is open year-round, and volunteers can make contributions for 2018 from now until mid-August. Birds observed earlier this season, and last season, can also be reported.
We would like to extend a big thank-you to everyone who has contributed their 2018 observations so far. We’re grateful to see that data pouring in! The atlas wouldn’t be possible without our small army of dedicated volunteers and collaborators working diligently to update the maps on Saskatchewan’s bird diversity. A special thank-you is due to our volunteer Regional Coordinators, who help to motivate and direct the efforts of volunteers in their regions and beyond.
The Saskatchewan Breeding Bird Atlas is the result of a partnership between Bird Studies Canada, Environment and Climate Change Canada, Saskatchewan Ministry of Environment, the Nature Conservancy of Canada, Nature Saskatchewan, and the Saskatchewan Wildlife Federation. Important financial support for the project comes from Environment and Climate Change Canada, the Saskatchewan Fish and Wildlife Development Fund, Wildlife Habitat Canada, Orano Canada, SaskPower, Weyerhaeuser, The McLean Foundation, Tolko Industries ltd., SaskEnergy, K+S Potash Canada, and the Baillie Fund.