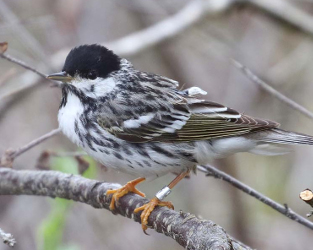 A bold research team, led by the University of Guelph and Bird Studies Canada, spread out across the boreal forest in June in an effort to recapture some very specific Blackpoll Warblers. In 2016, about 120 blackpolls were outfitted with geolocator tracking devices in four locations across their range: Nome and Denali (Alaska), the Teslin area (Yukon), and Churchill (Manitoba). In 2017, the researchers returned to the same sites, recaptured 27 of the warblers, and retrieved their geolocators and the data stored within. The subsequent analysis, currently underway, will reveal some exciting information about one of the world’s most powerful and enigmatic long-distance migrants.
Past work by this research group has already brought to light one astounding migratory feat of the Blackpoll Warbler. For over 50 years, it had been speculated that these birds complete a non-stop flight over the Atlantic – from northeastern North America to either the Greater Antilles or the northeastern coast of South America – during fall migration, instead of taking overland routes. A 2015 geolocator study provided the first direct evidence to support this, with four Blackpoll Warblers flying up to 2770 km across the open ocean over two to three days. This is the longest non-stop flight over water conducted by a landbird of this size (the mass of a Blackpoll Warbler is about 12 g).
But there’s much more to uncover about this species’ intriguing life history. It is hypothesized that before making that demanding transoceanic flight south, blackpolls first fly eastward across the entire continent – from breeding grounds in Alaska, all the way to the eastern seaboard! If this is correct, it’s truly remarkable. No other landbird of this size covers such a great distance on migration (a round trip of up to 20,000 km, or maybe even more).
The results of this study are highly anticipated, and not only because they have the potential to be extremely cool. More importantly, they will provide otherwise unobtainable information about the timing and length of flights, routes taken, stopover locations, and overwintering sites of Blackpoll Warblers. Some populations of Blackpoll Warblers have declined significantly over the past 40 years. Fuller knowledge of their year-round movements will help to pinpoint the sources of these declines and when they occur in the annual cycle, which is a critical step toward their conservation. Further information about the breadth of the Blackpoll Warbler’s range and variation within the species will be investigated using stable isotopes and genetic markers.
We must remain in suspense for the time being while the data from the retrieved geolocators are analyzed. The results will be unveiled in a scientific journal in the coming months. Stay tuned!
In addition to the University of Guelph and Bird Studies Canada, this collaborative endeavour includes the Wildlife Conservation Society (WCS Canada), University of Massachusetts, U.S. National Park Service (Critical Connections Project), and Acadia University.
Funding and additional support for the study were provided by The Canada Foundation for Innovation, The Molson Foundation, The W. Garfield Weston Foundation, the estate of Fred Bodsworth, Teslin-Tlingit Council, the Churchill Northern Studies Centre, Bering Straits Native Corporation, Council Native Corporation, Solomon River Native Corporation, the Society of Yukon Bird Observatories, Denali Education Centre, Alaska Geographic, and Camp Denali.