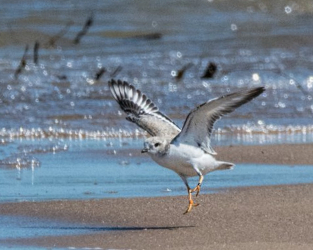 Piping Plover Nesting Update from Ontario
Ontario chicks have started to fledge! We consider a chick fledged when it can fly a distance of 50 m at one time. Many of the chicks are stretching their wings out and giving it a try, getting a few metres at a time – it’s a wonderful sight to see! At Wasaga Beach nine chicks have already fledged – a huge success. At other beaches, the chicks are getting close to flying; Sauble Beach has two, Darlington Park has two, and Toronto Island has three (numbers current as of 16 July).
Although the chicks will soon be independent young adults, they are still vulnerable. Chicks and adults alike need space on the beaches so that they can comfortably forage and build up strength for their long journey south.
Many of the adult females have already left the nesting sites to get a head start. We might soon see them appear on other beaches throughout Ontario as they stop for quick rests. Please report these sightings to Andrea Gress, so that we can track the journeys of the plovers.
You can learn more about Piping Plover Conservation in Ontario on our new program webpage, our Facebook page, and on Twitter.
Stay tuned to Bird Studies Canada’s enews for more updates on the 2018 Piping Plover nesting season from across Canada.
History of Piping Plovers Nesting in the Great Lakes Region
Did you know that there are three genetically distinct populations of Piping Plovers in North America, which breed in the Great Plains, Atlantic, and Great Lakes regions? The Great Lakes population is the smallest of the three.
Historically, Piping Plovers nested along all of the Great Lakes, and there were as many as 800 nesting pairs at a time. But by the mid-1980s, the Great Lakes Piping Plover could be found only in Michigan. There were a mere 11-14 nesting pairs left in existence.
What happened to their population in the ‘80s, you might ask? After the Second World War, people started going to beaches in unprecedented numbers, resulting in busy shores and a race to develop properties along the waterfront. Piping Plover habitat was severely diminished until there were only a few dozen plovers left in the wild.
In 1986, the U.S. Fish and Wildlife service started leading intensive conservation practices in Michigan, in an attempt to boost plover numbers – and it worked! Ontario followed Michigan’s lead, adopting similar conservation methods (see “Conservation Methods” below for details). As plovers began returning to their historical breeding grounds, Wisconsin, Illinois, and New York joined the efforts as well.
In 2007, Piping Plovers nested in Ontario for the first time in 30 years – a hopeful sign that their numbers were finally increasing. And then, in 2017, Piping Plovers nested along all five of the Great Lakes for the first time in decades. Within a span of 30 years, the number of pairs nesting across the Great Lakes region had gone from about a dozen to 76! This is strong evidence that our conservation efforts really are working. Plovers are returning to their historical breeding grounds.
An estimated 150 breeding pairs may be enough to sustain the population without the continued use of intensive conservation methods. This year, Bird Studies Canada began working alongside the Canadian Wildlife Service, the Ministry of Natural Resources and Forestry, Ontario Parks, Stewardship Grey Bruce, and Friends of Nancy Island, with the shared aim of reaching that goal.
Conservation Methods
Since Piping Plovers returned to Ontario in 2007, the province has been using conservation methods that have already proven successful elsewhere. Each method has been, and continues to be, carefully studied. We are confident that these actions have been dramatically aiding the recovery of Piping Plovers along the Great Lakes.
Installing perimeter fences around nesting areas on busy beaches: Fences give plovers the space to incubate eggs, forage, and rear chicks without being scared by people, dogs, or predators. We try to install the fence so that it is 50 m away from the nest in all directions. This guideline is based on the results of scientific studies of plover behaviour in response to common threats.
Installing exclosures over the nests: Exclosures are made of wire fencing that the plovers can easily fit through. They protect the incubating adults and the eggs from predators, and are a proven method for increasing hatch success. Experienced biologists observe the plover behaviors during installation. In almost all cases, the adults will return to the nest within minutes of the exclosure being installed.
Engaging the public and monitoring nests: Volunteers can be spotted at many of the nesting sites in Ontario. They are usually easy to identify based on their binoculars or spotting scopes, and often wear plover-themed t-shirts or visi-vests. They collect information about plover behaviours and predators, and inform the public about Piping Plovers and conservation methods – an invaluable part of plover conservation in the province.
Banding: Nearly all individuals (96-98%) in the Great Lakes population have band combinations on their legs. Each bird gets a metal USGS band bearing a unique nine-digit number, much like a social insurance number. They also get a series of colored bands, which enable researchers and volunteers to identify individual birds using scopes or digital cameras. This allows us to track the population with a high degree of confidence.
If you would like more information or are interested in becoming a volunteer, please contact Andrea Gress.
Bird Studies Canada gratefully acknowledges the Government of Ontario for providing support to the Ontario Piping Plover Program through the Species at Risk Stewardship Fund.