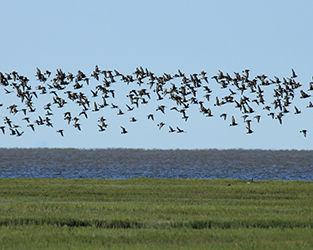 Bird Studies Canada and partners are thrilled to announce the designation of a new Important Bird and Biodiversity Area (IBA) in the southwestern James Bay region! The new site amalgamates seven former IBAs, covers an additional 716 km2, and was created to better reflect bird habitat use and movements within this unique area. The new IBA is named Pei lay sheesh kow, which in Cree means ‘an area that abounds with birds’ – a description it certainly lives up to!
The area has been identified as an IBA because it hosts large congregations of birds, serving as an important stopover point for shorebirds and staging area for waterfowl between the Arctic and Atlantic oceans. More than 25 species of shorebirds depend on the James Bay while on their way south in late summer and fall (including juvenile birds making their first migration). In spring and fall, many waterfowl species gather off-shore; some, like the Black Scoter, undergo flight feather moult at this time.
The table below highlights some of the impressive waterbird populations that depend on Pei lay sheesh kow. Remember that IBAs like this one are designated when at least 1% of a bird species’ global or continental population uses them regularly. Also keep in mind that these are daily totals. The seasonal totals are even more staggering!

The Moose Cree First Nation (MCFN), whose traditional territory completely encompasses the IBA, played a major role in defining the new site by applying local knowledge of birds, habitats, and land use. Members of MCFN are also watching over the site as IBA Caretakers.
Shorebirds are in steep decline, and are considered a priority for conservation action in the Western Hemisphere. Thankfully, the James Bay Shorebird Project was initiated in 2009 to better understand shorebird abundance and habitat use in the region. Bird Studies Canada is pleased to be a part of it, along with partners Canadian Wildlife Service, Ontario Ministry of Natural Resources and Forestry, the Royal Ontario Museum, MCFN, and Nature Canada. Work done within the IBA by participants in the James Bay Shorebird Project has included setting up Motus towers, deploying transmitters on a variety of shorebirds, and advocating for this candidate site to be designated a Western Hemisphere Shorebird Reserve Network site.
Exciting conservation work is ongoing at this IBA, so check back with the Bird Studies Canada blog for updates. To learn more, support this and other IBAs, and join the IBA community, sign up for the Ontario IBA newsletter or subscribe to our national Facebook page and group.