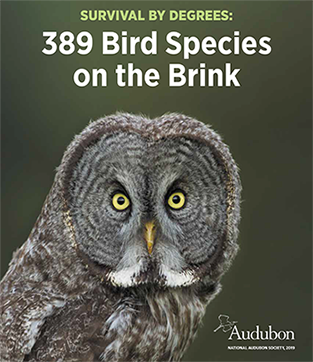 Two-thirds of North America’s birds will be seriously affected by climate change, according to a striking report released October 10th by the National Audubon Society. That’s 389 species out of 604 assessed.
Data from Bird Studies Canada, contributed by you – our 60,000 volunteer Citizen Scientists – were an important part of the analysis.
More northerly and westerly regions are the most affected. Perhaps the direst finding is that virtually all Canadian Arctic and Boreal Forest birds prove to be the most vulnerable, adding to many earlier forecasts that northern regions suffer more from changing climate.
In the last few weeks, we’ve heard tough news about birds: that North America has lost three billion birds since 1970, and that neonic pesticides harm and delay migrating songbirds, including the White-crowned Sparrow, a common species in North America.
But there is a welcome ray of hope in the Audubon report. If we take action to hold atmospheric warming to only 1.5 degrees Celsius, rather than the 3 degrees Celsius or more we’re headed toward, the impacts on most birds is substantially less.
That’s just the good news we need to hear right now: take action, save birds. If you are new to the effort, stay tuned to Bird Studies Canada’s enews to find out how you can help improve the outlook for our birds.