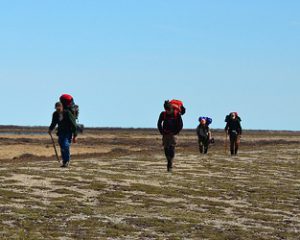 Breeding bird atlases are an integral part of avian monitoring and conservation in Canada today. Bird Studies Canada is proud to have played a lead role in atlas projects across the country: in Ontario (twice), Québec (twice), the Maritime Provinces (twice), British Columbia, Manitoba, and, most recently, Saskatchewan.
Atlassing is certainly not the only type of Citizen Science project, but it is a formidable contribution in many different respects. Canada is a massive country with a small population, and the vast majority of us reside in the south. Bringing the Citizen Science model, especially the “complete jurisdictional” approach of atlassing, to the enormous unsurveyed or under-surveyed parts of this country is an intimidating prospect. Canadians are an intrepid bunch, however, undaunted by frigid weather, horrendous bugs, and vast expanses of roadless swamp. Canadians also know how to rally behind the cause of celebrating our wilderness and its rich biodiversity. With the recent launch of the online book, the Atlas of the Breeding Birds of Manitoba, we have reached a level of Citizen Science that many said was unattainable. The little province of Manitoba, with a mere handful of birders and at least two-thirds of its land area tremendously challenging to access (over 75% of its atlas grid squares have no road access whatsoever), has delivered proof that breeding bird atlases can boldly go where few Citizen Scientists have gone before.
To see the results, devote a little time to reading the Atlas of the Breeding Birds of Manitoba. In the introductory chapters, you will see how over 1000 volunteers rallied to the cause, donating more than 42,000 hours of survey effort in over 3000 atlas squares to compile over 325,000 records of breeding birds. This is not record-breaking, but for a province of only 1.2 million people, it is arguably the best per-capita coverage ever achieved by an atlas. The real picture, though, lies in the maps of survey effort and all the species maps that show just how much of the roadless north was surveyed, with every means of transportation possible, on more than 70 remote area expeditions. The real success is how we achieved the balanced coverage that permitted the analyses that redefine our knowledge of Manitoba’s breeding birds and provide a much-needed baseline.
Many of you are familiar with the live data summary tools and distribution maps that grace an atlas website over the course of the project. We invite you now to read through the first 80 published species accounts (the remaining 232 species accounts will be published over the course of 2017-18), with many exciting new interactive features, such as:

When viewing the maps, there are a number of overlays to choose from so you can see how distribution and abundance interact with BCRs, roads and towns, etc. The best starting point for exploring this rich resource is the Table of Contents. Once you have perused the first 80 published species accounts, stay tuned as more are published online.
To everyone involved in this project in any way, thank you for everything you have done for Manitoba’s birds. We hope you enjoy the fruits of your labour! 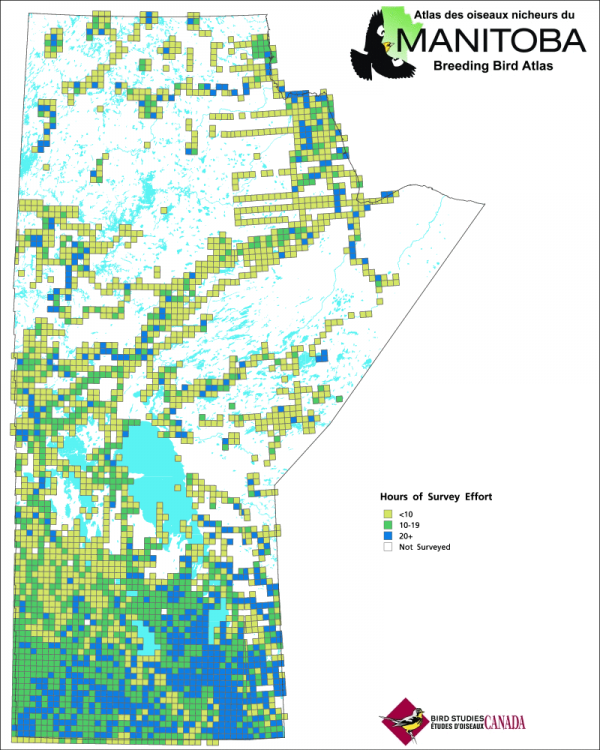